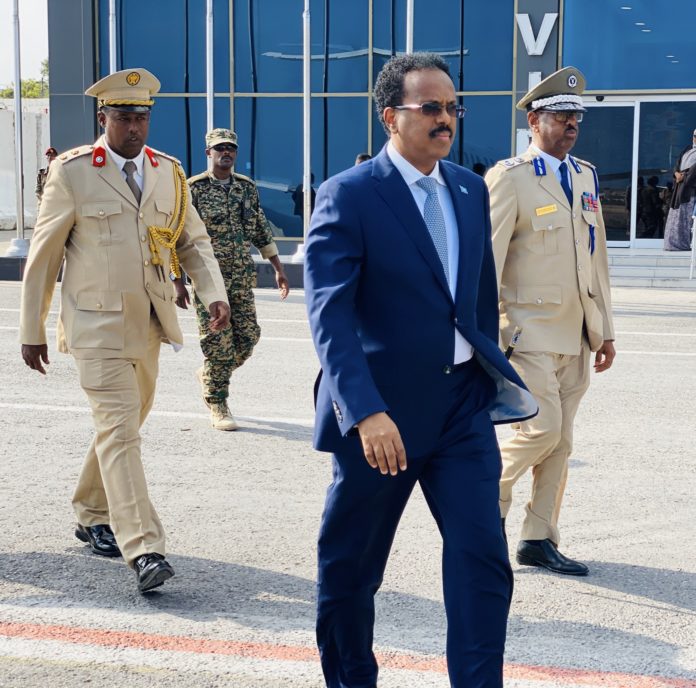 President Mohammed Abdullahi Farmajo has left for Kenya to attend the International Conference on Population and Development (ICPD25) that will be held in Nairobi between 12th and 14 November 2019.

Their meeting comes at a time when, Kenya and Somalia are at logger heads over where their maritime boundary in the Indian Ocean. The International Court of Justice in The Hague could now decide who owns the sea, a decision that will only suit one.

ICPD Co-hosted by the governments of Kenya, Denmark and the United Nations Population Fund (UNFPA), the Nairobi Summit takes place on the 25th anniversary of the ground-breaking 1994 International Conference on Population and Development (ICPD).

179 world leaders reached a consensus and adopted a programme of action, which enshrined individual reproductive rights as a basic human right.

During the last conference in 1994 in Cairo, ICPD adopted a landmark plan that sought to advance human well-being by placing the rights of individuals at the centre of the global development agenda.

States and other participants will be making commitments at the Summit to accelerate the realization of the ICPD Plan of Action with the aim of achieving zero infant, child and maternal mortality, access to education particularly for girls, provision of universal access to sexual and reproductive health services, empowerment of women and girls, zero gender-based violence and elimination of harmful practices such as child marriage and female genital mutilation.

Over 5000 Diplomatic missions and International Organizations are expected to attend the Nairobi Summit, including Heads of State and government, Ministers, Civil Society, Youth Leaders, parliamentarians, business organizations, media, UN Agencies, Private Sector Organizations and Women’s group to discuss and agree on actions to accelerate the implementation of the ICPD programme.