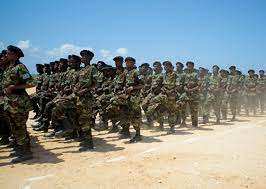 Somali troops trained in Eritrea are expected to arrive home with a mission to lead an operation aimed at seizing key cities including Puntland’s administrative seat, Garowe as part of the current acting president’s efforts to hijack upcoming polls.

This was disclosed by the leader of Wadajir opposition party Abdirahman Abdishakur on Thursday.

The soldiers had been deceived with the promise that they would be taken to Qatar to keep the security during the World Cup before being transported to Eritrea where they were used as cannon fodder in Ethiopia’s Tigray War.

“The soldiers died fighting in foreign wars. Some died of hardship, disease and hunger. Now thousands of them will be brought back soon so they could be used in the instigation of civil war by the people who want to seize the country by the barrel of the gun. The plan is for these soldiers to be deployed in Baidoa, Mogadishu and Galkayo, to be used for violent capture of Buale, Mogadishu and Garowe”-Abdishakur said in a tweet.

He added: “Farmajo is not ready to hand over power through elections and so we must stop him now before he leads us into state of chaos and return to civil war. The parents who were deceived before must not allow for their sons and daughters to be doomed, and we will beside them, as well.”

The Somali government has not commented on the allegations by opposition figure.