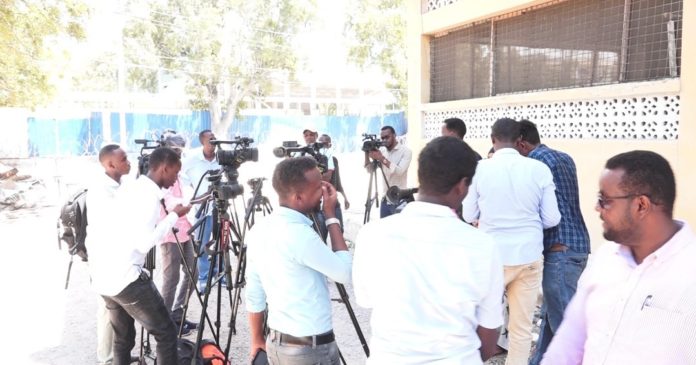 Somali Journalists Syndicate (SJS) calls for authorities at the Somali Federal Parliament (People’s House) to immediately restore access of the independent media and journalists to the People’s House and allocate space for journalists during ongoing parliamentary debates.

Journalists who were due to report from Saturday’s Parliamentary Debate have told SJS that they have been denied access into the Parliament by officials at the People’s House forcing journalists to leave without reporting.

“When we have arrived at the gate, officials told us that representatives from independent media will not get access due to lack of space but those from state-media were allowed in,” Universal TV parliamentary reporter and member of SJS, Mohamed Abdinasir Ayanle said.

Press officers at the People’s House told SJS that the decision to restrict independent media was made last week due to the proposed construction of the main Parliament Building.

SJS vehemently opposes any restrictions against the independent media and journalists covering the Somali Federal Parliament. The People’s House is the core branch of the country’s legislative organ and only through the independent media will the public know about what legislations are being processed especially in this critical time ahead of next year’s general elections.

“Somalia’s whole democratic process will be undermined if journalists and independent media are not allowed to cover all proceedings of the important political events including to Parliamentary debates and to properly scrutinize the elected representatives,” Abdalle Ahmed Mumin, the Secretary General of Somali Journalists Syndicate (SJS) said “We call authorities at the People’s House to immediately restore access for the independent media to the Parliament.”

“It is an international standard that journalists should be given maximum access to parliaments in order to report from the legislative process and the work of the elected representatives. Somalia should not be an exempt.” adds Mr. Mumin.