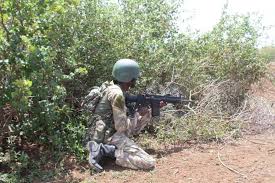 Locals spoke to the media said that Al Shabab launched an attack on Awdhigle town on Wednesday night triggering heavy fighting between the army and the militia.

Al Shabab reportedly raided the base with mortar shells before the fighters attempted to storm the base from various directions.

Military officials who confirmed the attack said the Somali army’s vigilance led the fighters to retreat.

The casualties of the attack is not known.