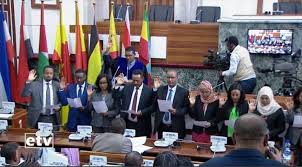 The Ethiopian parliament on its 14th regular session on Thursday approved the appointments of Adanech Abebe as Attorney General, Dr. Liya Tadese as the minister of Health and Laqe Ayale as Revenue minister.

The House approved them with overwhelming majority where 21 voted against them.

Filsan was born in Dire Dawa but she spent much of her teenage and adulthood years in Addis Ababa. She earned Leadership & Management from Unity university