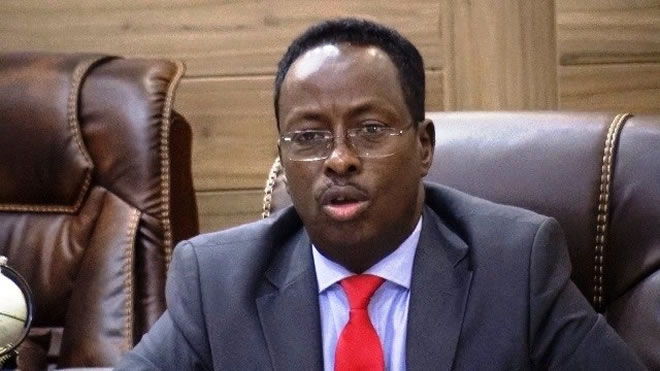 In the regular Somali cabinet meetings, competition for attention is not a commonplace encounter, but it was different on Thursday when a minister stole the limelight from the day’s agenda to Somaliland’s unemployment challenges and its unification talks with Somalia which he said should have been the main agenda instead.

It was perhaps the right time that Mr. Mohamed Abdi Hayir, Somalia’s minister for commerce and industry should have interrupted the debate to present his case given the fact that Somali president Mohamed Abdullahi Mohamed was chairing the day’s cabinet meeting which was being broadcast live on the national television station.

“The issue of Somaliland should not be mixed with the other national policy issues – it’s a separate issue that should be addressed accordingly.” He suggested, calling on the president to push for more engagement in addressing ranges of issues facing Somaliland.

Mr. Hayir, a politician from Somaliland has also disputed whether the government’s current plans towards Somaliland would help change people’s lives for the better, stressing that Somaliland’s people with an almost 30-year-old mature peace deserved a bigger attention.

“Despite having a mature peace, the people of Somaliland face unemployment and education challenges that I think should be included into the national plan. The government has to reach them.” He reiterated in his speech.

Despite maintaining its separate economy, currency and army, unemployment and economic fragility in Somaliland have been pressing issues.

Two weeks ago, Edna Adan, Somaliland’s Special Representative for talks with Somalia said that Somaliland would not rule out a possible unification with Somalia with the condition that it gets a ‘credible’ government that the self-declared government can negotiate with for unification.

However, the minister who has largely focused his speech on development issues facing Somaliland has steered clear of delving into the unification issues but instead reiterated the significant of closer relationships between the central government and Somaliland.

“The plans for achieving a complete federalism system, the provisional constitution’s review and elections cannot be achieved unless Somaliland’s issues are addressed if we are serious in our quest for a unified country.” The minister argued, addressing his speech to the president, seated nearby.

Despite the minister’s remarks, directed at the president, Somali Prime Minister Hassan Ali Khaire acted in response on the president’s behalf, insisting that the government’s plans towards Somaliland remain to be a separate and important matter that leaders would address delicately.

The minister’s extraneous speech which caught ministers off guard and left an eerie of silence across the meeting’s hallway marked an end of the day’s cabinet meeting that fell short of addressing the day’s meeting agenda that would have otherwise discussed over the government national plans.

Somaliland, aggrieved by the deadly pursuit of its armed secessionist struggle for an independence by Siad Barre’s regime which killed tens of thousands of people in 1990s has declared a unilateral independence from the rest of Somalia after armed warlords overthrew the central government 1991.

However, no country has so far recognized it as an independent state. The breakaway territory often looks its history with Somalia through binoculars of conflict and resentment since 1990s,

In recent years, representatives from Somaliland and Somali government have held several rounds of high-profile talks. However, attempts by the two sides to reach consensus failed to make a breakthrough after the two sides maintained firm grounds against each other, a move that observers said complicated mediation efforts by the Turkish government which sponsored the talks.

Somaliland leaders had also insisted that the enclave’s ‘independence’ would have to remain out of touch during the talks as opposed to Somalia’s efforts to convince the enclave to reunite with it, an approach long dismissed by Somaliland.