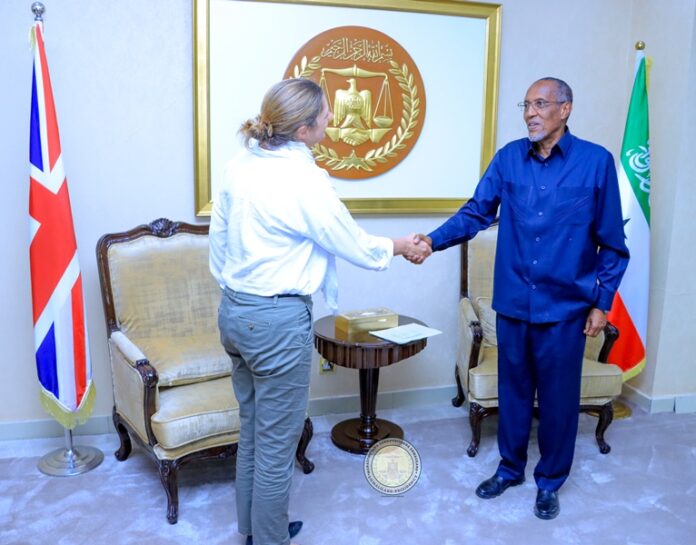 Somaliland president H.E. Musa Bihi Abdi on Tuesday, met with UK envoy Mrs. Kate Foster, at the presidential mansion. The diplomat was on an official visit to Somaliland .

According to presidential press release, the meeting discussion pertained ways on which the British government could chip in to support the Waheen Market fire disaster victims and aid the drought affected population in the country.

They also talked about strengthening of bilateral relation of two nations and tightening of security in the greater Horn of Africa region which Somaliland plays a crucial role. Also in the agenda was preparation of upcoming Somaliland presidential and senatorial elections.

Speaking at venue the head of state thanked the UK government for their sympathetic messages about the fire disaster at Waheen Market. The president sent his appreciation of the empathetic messages  shared by British PM H.E Boris Johnson, Secretary for International Affairs, House of Commons and House of Lords members and the United Kingdom citizens at large with the people of Somaliland.

The president was flanked by his foreign affairs minister Dr.Issa Keyd Mohamoud whereas Mrs.Foster was accompanied by UK representative to Somaliland Ms.Lizzie Walker and UK development fund boss Mr.Morgan Riley.