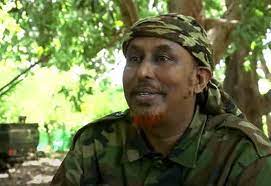 Senior Al-Shabaab leader Mahad Karate, the militant group’s elusive intelligence chief, says their aim is to take control of Somalia after more than 15 years of an insurgency campaign aimed at toppling the western-backed government in Mogadishu.

“That’s our aim, to take control of Somalia is our aim, God willing,” he said, in an interview with UK-based Channel 4 TV.

Asked about why the group is opposing Western-backed democratic governance system in Somalia, he said: “It’s easy to explain. Democracy is a religion for non-Muslims. It’s against our believes and identity. We are Muslims. Islam and Democracy cannot be compatible. Democracy is about the people’s choice. What we believe is that the ‘legislation is for none but Allah’.”

Jamal Osman, a well-known journalist with Channel 4 has gained access to film in Al-Shabaab’s hinterland and witnessed a ceremony in which nearly 200 members of the group graduated after completing military training. Several military vehicles could be seen in video under the shade of trees and group’s leaders including Mahad Karate were sharing a feast with the new graduates.

“We don’t believe there is a legitimate government. In general, anyone whom the Sharia forbids us from, we won’t negotiate with. Anyone whom the Sharia allows us, we will negotiate with, when the time is right, God willing,” Mahad Karate, on whose head the US put $5 million bounty, told Channel 4 when asked about whether they would begin talks with Somali government.

Despite allegations that the extremist group curbs certain freedoms, a female computer teacher in the Al-Shabaab stronghold of Jilib in the Middle Juba region said they were encouraged to work.

“The women they work. Al-Shabaab urge us to work, they don’t force you to stay at home and encourage us to come out and work. They give us suitable conditions to work and land also,” Umu Mohamed said while in a class teaching female students computer basics.

Abdirahman, is a barber who moved from the town of Hargeisa in Somaliland and tells Channel 4 about his decision to open a venture in Jilib.

“I decided to move here and work in [Al-Shabaab’s] Wilayat after seeing the law and order, and peace and good things,” Abdirahman said, adding that he was a drug addict before and quit using drugs due to an Al-Shabaab-imposed ban.

As seen in the documentary video, the extremist group’s shadow governor of the Lower and Middle Juba regions have shown Channel 4 a new hospital they constructed in the town of Jilib without foreign aid, which cost more than two million dollars. Militants could also be seen providing food aid to dozens of poor residents.

According to Channel 4, Al-Shabaab controls more than a third of Somalia and its reach spreads far further, with the government’s control diminishing.