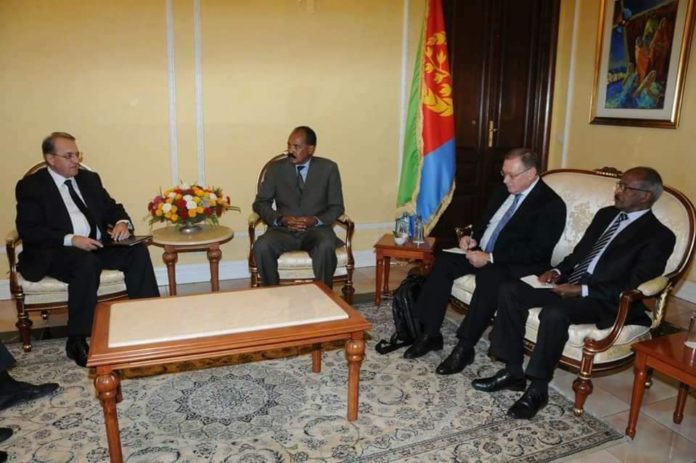 “At the talks, also attended by Eritrea Foreign Minister Osman Saleh Mohammed, [they] focused on a range of issues related to further development of the Russian-Eritrean mutually beneficial cooperation in trade, economic and humanitarian spheres with an emphasis on promising joint projects on development of mineral resources, finance, education and personnel training,” the ministry said.

The sides reaffirmed their willingness to deepen political dialogue and to coordinate their foreign policies on the basis of fundamental principles of international law and similar positions of the two countries on topical international issues.

“Apart from that, [they] stated that international efforts are needed to support the soonest solution to all disagreements among the nations in the Horn of Africa and to strengthen relations of good neighborhood, stability and security in that region. In this context, they focused on a task of the soonest end to the process of normalization between Eritrea and Ethiopia, Somalia and Djibouti and a complete removal of anti-Eritrean sanctions imposed the UN Security Council,” the Russian Foreign Ministry said.

In 2009, the UN Security Council imposed international sanctions on Asmara for its support of anti-government groups destabilizing the political situation in the region. In 2011, the sanctions were toughened after Eritrea was accused of planning an unrealized terror attack with the aim of disrupting an African Union summit in Addis-Ababa.