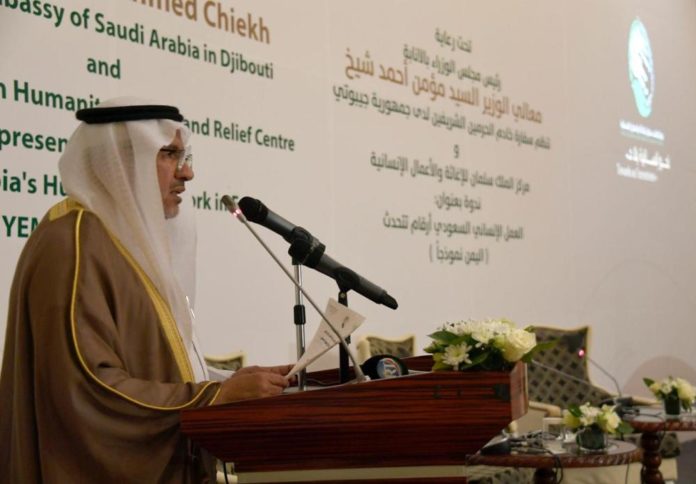 DJIBOUTI — A seminar entitled “Saudi Arabia’s Humanitarian Work in Facts — Yemen as a Model” was held in Djibouti on Sunday. The event was organized by King Salman Humanitarian Aid and Relief Center (KSrelief) in cooperation with the Saudi Embassy in Djibouti.

The seminar was attended a number of officials, including Moumin Ahmed Cheikh, interim prime minister of the Republic of Djibouti; Hassan Omar Burhan, interior minister; and Saudi Ambassador Abdulaziz Bin Abdullah Al-Dawood. Representatives of UN agencies and humanitarian organizations in Djibouti, and diplomats from the coalition countries were also present.

Addressing the seminar, Dr. Abdullah Al-Rabeeah, supervisor general of KSrelief, said historically Saudi Arabia extended the hand of support to brotherly and friendly countries based on its belief in the importance of humanitarian work.

“This commitment affirms the Kingdom’s sense of responsibility toward communities and countries of different faiths, languages and cultures, establishing it as a leading country in the field of international humanitarian and relief work. To further emphasize the significance to the Kingdom’s leadership in the unification, improvement and broadening of its humanitarian work, King Salman Humanitarian Aid and Relief Center (KSrelief) was established to act as the humanitarian arm of the Kingdom, and to reflect the humanitarian dimension of this country and its leadership,” he said.

Since its establishment on May 13, 2015, the center has implemented 482 projects in 42 countries at a total cost of about $2 billion, Al-Rabeeah said.

These projects have been implemented based on actual humanitarian needs and according to carefully-studied priorities and international standards, he added.

Due to its importance to the Kingdom and its people, Yemen has been the recipient of the largest number of the center’s projects, with support to many sectors, including food security, health, shelter, Al-Rabeeah said, adding that a total of 294 projects at a cost of $1.66 billion were implemented in the country.

Significant initiatives carried out by KSrelief in Yemen include the Child Soldiers Rehabilitation Program, the Saudi project for landmine clearance (MASAM), and the Artificial Limbs Center. KSrelief has given a great deal of attention to the needs of Yemeni refugees – particularly those living in Djibouti.

“In addition to the huge efforts made by the government of Djibouti to host these refugees, the center has implemented many projects to support them from the time they arrived in Obock. The center has also taken the initiative to construct the Saudi village in Obock, which includes 300 housing units, two medical clinics, a school and a mosque; all are equipped with everything required to assist the refugees. Today, the operational contracts for these projects will be signed, and tomorrow, they will officially launched,” Al-Rabeeah said.

“For the past 10 years, the Kingdom has been keen on supporting the Republic of Djibouti with many humanitarian and development projects and programs – a total of 18 projects at a cost of over $166.3 million. Saudi Arabia continues its generous support to all countries with humanitarian needs due to conflicts and natural disasters, based upon the Kingdom’s belief in its noble humanitarian mission to promote international efforts and initiatives aimed at achieving global security, stability and peace,” he added.

Al-Rabeeah clarified that KSrelief applies the highest international humanitarian standards in all of its programs, providing impartial assistance to all people in need.

He spoke about a few of the unique service projects KSrelief has implemented in Yemen, including the Child Soldiers Rehabilitation Program, which aims to rehabilitate 2,000 former child recruits and other children who have suffered traumatic losses in the conflict by providing physical and emotional support services to the children and their families. The program also includes awareness seminars for families of the children who were recruited by the Houthi militias.

Another of KSrelief’s qualitative projects is the Artificial Limbs Centers in Ma’rib, Aden, and some Saudi hospitals along the Kingdom’s southern borders that provide artificial limbs to landmine victims. The Houthis have planted large numbers of explosive devices in many parts of Yemen, exposing civilians in many population centers in Yemen to the possibility of severe injuries and even death. Al-Rabeeah said the Kingdom responded to the UNICEF and WHO appeals with $66.7 million to combat cholera in Yemen.

He also talked about KSrelief’s “MASAM” project to demine Yemen. The project employs more than 400 specialists to spearhead mine clearance in the country.

He said 1,000 tons of medical, shelter and food aid, carried by 50 airplanes, arrived at Al-Ghaydah Airport to provide assistance in Aden, Ma’rib and Al Mahrah. The Darb Al-Khair ship carried 3,540 tons of dates, medical aid, and food baskets to Yemeni beneficiaries, and the Al-Nawa Express ship carried 4,500 tons of medical and food aid. In addition, 2,612 trucks have carried more than 50,600 tons of food, shelter and medical aid, and 85 tons of food and medical aid were air-dropped in Taiz during the ongoing Houthi siege there.

Al-Rabeeah stated that under the directives of the Custodian of the Two Holy Mosques, KSrelief had established a transparent aid data platform in the region – the Saudi Aid Platform. KSrelief also launched an e-Volunteer Portal, which is an important platform to encourage volunteerism in the Kingdom.

Following the speech, the audience watched a visual presentation about the Saudi Village for Yemeni refugees, which will be officially opened in Obock on Monday.

The interior minister of Djibouti spoke about Yemeni refugees who arrived in Djibouti since the beginning of the humanitarian crisis in Yemen. He discussed the projects implemented by the KSrelief to serve the Yemeni refugees to improve their living conditions.

Interim Prime Minister Moumin Cheikh conveyed the message of President Ismaïl Omar Guelleh of Djibouti, praising the Kingdom’s support since his country’s independence. He pointed out that the Kingdom is a model for international humanitarian work and cooperation.

Moumin Cheikh then expressed his sincere thanks and appreciation to Custodian of the Two Holy Mosques King Salman and Crown Prince Muhammad Bin Salman for their ongoing humanitarian and relief efforts, which reflected the close relationship between the two countries.

The audience watched a documentary on the National Assistance Office for Refugees and Disaster Stricken People (ONARS).

At the end of the seminar, Al-Rabeeah answered questions from the media on the role of the Kingdom in supporting Yemeni refugees in Djibouti. — SG