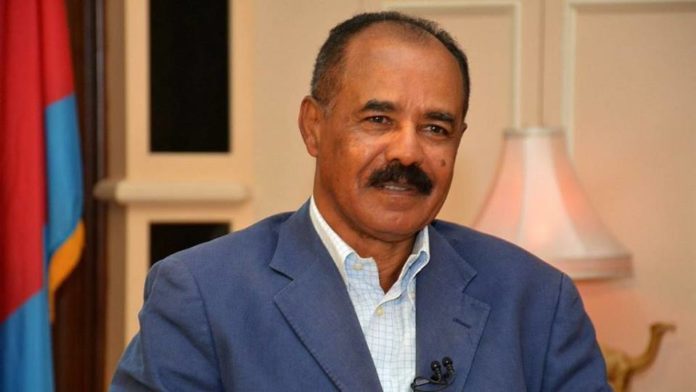 Asmara, 04 November 2018- In an extensive first part interview on 3 November  on the significance, progress and regional development of the historic peace agreement between Eritrea and Ethiopia that was broadcasted live by Eri-TV and Dimtsi Hafash (the National Radio), President Isaias Afwerki said that the people and Government of Eritrea will give utmost  priority for the consolidation of the new era of peace and friendship prevailing in the region.

President Isaias went on to say that the peace process goes beyond the acceptance of Ethiopia the full ruling of the  EEBC and represents new, fourth epoch where external  deceptions of controlling the region have been vanquished through resilience  of the Eritrean people, political dynamics in Ethiopia and global developments.

President Isaias also paid homage to the people of Eritrea for their unparalleled  steadfastness and resilience. and for proving their determination and emerging triumphant against decades-old tribulation that few other peoples could have withstood.

President Isaias underlined that the new reality will have its own contribution to the shared visions of cultivation of solid cooperation in the wider Horn of Africa, the Nile Basin and the Arabian Gulf that is endowed with substantial resources, huge populations and considerable human capital.

President Isaias Afwerki will conduct the second part of the interview focusing on the internal situation in connection with the new development.