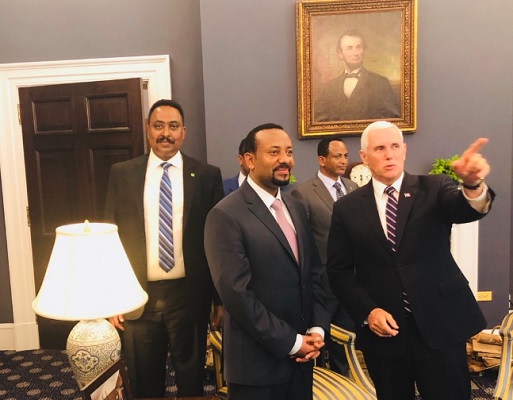 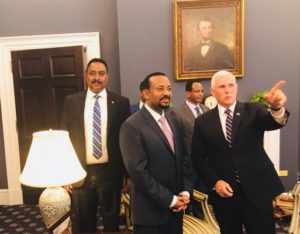 Bilateral relations, including trade and investment, and ongoing reforms in Ethiopia were among the issues discussed. The ministry of foreign affairs of Ethiopia didn’t disclose until today that PM Abiy Ahmed would be meeting with US vise president. The intention of his trip to the United States was described as “meeting with Ethiopians in the United States.”

The Ministry of Foreign Affairs of Ethiopia disclosed this afternoon that prime minister Abiy Ahmed “reiterated the fact that Ethiopia and the UnitedStates have enjoyed strong partnership and bilateral ties.”

Mike Pence reportedly talked about longstanding relation and partnership between the United States and Ethiopia. As per VOA Amharic report, the vice president also commended prime minister Abiy Ahmed’s reform measures in the areas of human rights, trade and investment, and the relation with Eritrea which he described as “historic.” As well, he expressed a willingness to foster trade and investment relations between Ethiopia and the United States.

The United States wants Ethiopia to play a leadership role in terms of conflict resolution in the Horn of Africa, according to the statement from the vice-president’s office.

Prime minister Abiy Ahmed also met with IMF director, Christine Lagard, who said “…We had an engaging and productive meeting” in a twitter message.

Abiy Ahmed managed to have time to meet with president of the World Bank,Jim Young Kim. The later pledged continued support to Ethiopia.