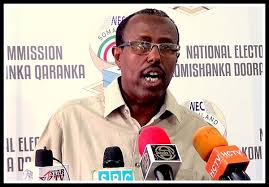 Last week the National Electoral Commission announced a long-awaited decision saying they are not able to hold an election in 2019.

The electoral commission said the election will not be possible for technical, political and legal reasons. The electoral law is a draft with the parliament, and disagreement over the composition of the commission is yet to be solved.

The term of the members is also ending in November.

The public has been waiting for a parliamentary election to happen in nearly ten years.

Recently the three political parties made an agreement intended to solve the controversy on the composition of the commission. Their agreement requires a change in the law, which is the job of the parliament.

The members of the House of Representatives are 82 and there is no law defining how these members have to be shared by the six regions of Somaliland. The current composition was temporarily approved for 2005 election.

Some people accuse the members of the Parliament of delay tactics who are using the seat allocation as a pretext to stay indefinitely.

However, it is an important question that remains unresolved which will pose a challenge to hold elections.

Unless political parties come into agreement, it is likely that the House of Elders will extend the term of the House of Representatives more than a year, experts believe.