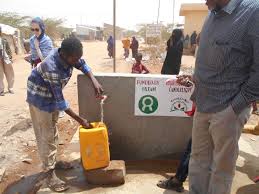 In our series on Somalia’s IDP camps, Radio Ergo’s reporter in Sanag spoke with displaced pastoralist families living in a village camp near the town of Hingalol. They receive no aid or assistance, other than handouts from relatives who have something to spare. They feel dejected and miss their former lifestyle.

Shamis Eidid Warsame settled in Sibbayevillage three years ago after a drought killed off almost all her livestock.

She had hoped to get a better life in the camp, at least with some help and support to tide her through the crisis, but she says she is in a worse situation than before.

“Life was better before because we had meat and milk,” Shamis told Radio Ergo.

“Let alone development or progress, we have nothing to eat nor even clean water to drink!”

She gets a little from her relative, but nothing from the authorities or any aid agencies in the Sanag region.

“Apart from our nomadic lifestyle, we have no other skill to survive. The livestock perished during the drought three years ago subjecting us to this struggle and suffering,” said the mother of seven.

Shamis once had 300 goats and 30 camels, but the herd has dwindled to just two camels and only 12 goats.

Seventy-four families in a similar position to Shamis live in Sibbaye camp. The boreholes in the area produce salty water that is not fit to drink, so they have to buy water from privately owned water tankers coming from Hingalol town, 20 km away.

Shamis can ill afford the expense and has had to let her children give up school and stay at home, in order to make ends meet.

“In this village, we have only one private [fee paying] school, but my children don’t go to the school as I can’t get money for both food and school fees at a time,” Shamissaid.

Another former pastoralist in the camp, Abduqadir Farah Mohamud, told Radio Ergo his wish would be to go back to his rural area if he could get some support to do so.

“Rather than staying, I would rather go back and restart my old way of life rearing livestock, because here we have no food, water or even hospital,” Abdulqadir said.

He has only 14 left of his original herd of 200 goats. His family survives with little support from a relative in the town.

There are few income-earning opportunities in this area. Faduma Ganni runs a small kiosk selling tea trying to earn a living. She arrived in the village three years ago after a drought killed all her livestock.

“I get very “Let alone development and progress, we have nothing to eat nor even clean water to drink,” said Shamus. little money from the kiosk,” Faduma said.

“I work most of the time and sometimes get just three dollars,” said Fadumo, who tries to raise the school fees for three children from the kiosk.