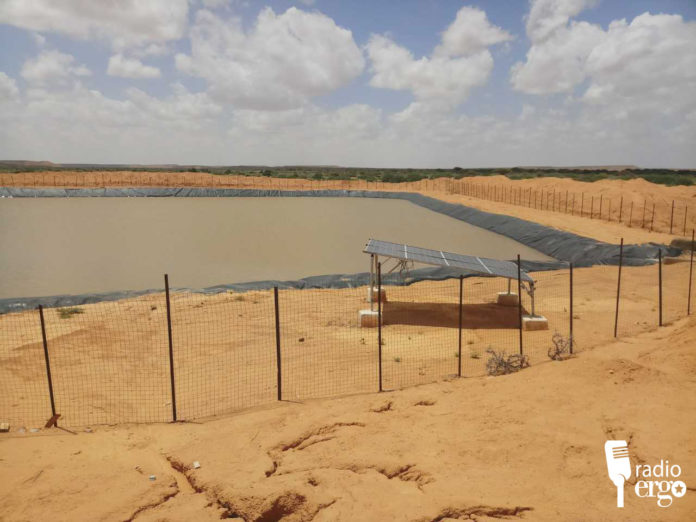 A newly built dam in northern Somalia’s drought-ravaged Nugal region is giving a reprieve to thousands of families who have lived through perennial water shortages.

The dam, with a capacity equivalent to 120,000 barrels, was opened last month by Puntland’s ministry of water in Salahley village in Nugal. It covers 32,000 metres squared and is floored with a waterproof lining to prevent seepage.

Located 12 km south of Garowe town, Salahley has a population of around 500 families. The dam will also serve another 600 families in nearby villages including Awr-ulus, Remati, Abarey and Yombays.

Salahley has no boreholes and people had been surviving on a small water catchment that often ran dry. Villagers used to fetch water from Garowe town carried on their backs and on donkey carts

“This is real progress!” Mohamed Ahmed Garowe, a pastoralist in Salahley, told Radio Ergo. “We have been facing water shortages for a long time and we are often forced to move during dry seasons, but we are now relieved,” he praised.

Mohamed recalled having to flee the village due to lack of water after successive seasons of drought. He has a family of seven children.

“For months we were living in another village just because of water, and people were about to die as there was no water to drink,” he said.

“The village now looks habitable because life cannot exist without water; we are also expecting more from the government to make the village comfortable,” said Mohamed.

Solar-powered generators pump water from the new dam into troughs.

Puntland’s Enviroment minister, Ismail Diriye Gama’did, told Radio Ergo that the project aimed to increase access to water in an area where water shortage has persisted for several years and led to conflicts among local communities.

“Our main aim is to collect the rainwater and make use of it. It will help the community very much because they used to trek for water over long distances,” the minister said.

He confirmed that that 10 other dams would be constructed with UN Development Programme (UNDP) support in Bari, Mudug, Nugal, Karkar and Sanaag regions to overcome the challenges of water shortage.