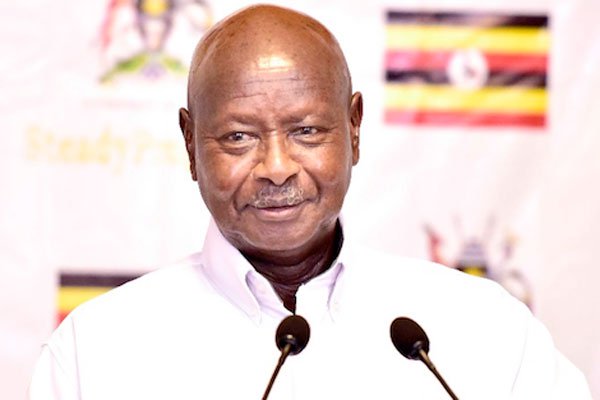 President Museveni last night shared snippets of a private conversation with his Somali counterpart, disclosing that he told President Mohamed Abdullahi Mohamed the problem with his country is collapsed systems.

“I told the Somali President that you can’t have a functional government if the system is not organised,” Mr Museveni said, referring to details of his one-on-one talk with Mr Mohamed’s during his last visit.
Recollecting his discussion, President Museveni said of his counsel to the visiting head of state: “First pacify the country so that the state can be stable and the people will start paying taxes, then you can begin to pay your officers.”

Mr Museveni last night revealed details of his conversation with the Somali leader as he hosted 19 retiring UPDF generals at State House Entebbe, the most senior of them being Gen Joram Mugume, chairman of the National Enterprises Corporation, the army’s business arm.
The President raised the guidance to Mogadishu in the context of sacrifices he said the National Resistance Army (NRA) rebels, the forerunner to UPDF, made during their five-year bush war that catapulted him to power.
He said the fighters lacked necessities of life, but persevered to liberate Uganda.

Mr Museveni said Somalia should emulate similar sacrifices and its leaders should worry less about salary payment to troops but focus on building a strong security force.
Uganda was the first country, in March 2007, to deploy soldiers in Mogadishu under the United Nations-authorised African Union Peace-keeping Mission (Amisom) and the UPDF remains the largest troop contributor to-date.

There is push by the international community and some Somali leaders to exit immediately, but concerns over fragile security and fears about possible rapid erosion of gains, has piled pressure to accelerate capacity building for Somali National Forces.

Twenty of its officer cadets trained with and graduated alongside UPDF counterparts at Kabamba military school last Saturday.
At the State House function last night, President Museveni praised the work of the retired generals and assignment them new tasks, focussed on the mobilisation of the masses on household income improvement and responsible investment of retirement package.
“When you go to the villages, keep up the good effort in helping the people. Please, try to encourage them to work for food security and also for money,” he said.

He added: “Invest the little money you have got from the army and also help us to talk to the people that you can’t only produce for the mouth; you must produce for both the mouth and money.”
Gen Mugume, speaking on behalf of colleague retirees, said: “Retirement is good for the institution to remain strong and healthy”.
“What counted most for us was commitment and, yes, we achieved that. We are leaving behind a strong, resilient UPDF in the hands of able young men and women,” he added.
Mr Museveni said one of the priority issues for him is fast-tracking of the delayed East African political federation. “I am worried,” he added, “that if Africa doesn’t have the centre of gravity, it can be very dangerous.”

For the Retired
Gen Joram Mugume. Retirement is good for the institution to remain strong and healthy. What counted most for us was commitment and, yes, we achieved that. We are leaving behind a strong, resilient UPDF in the hands of able young men and women.