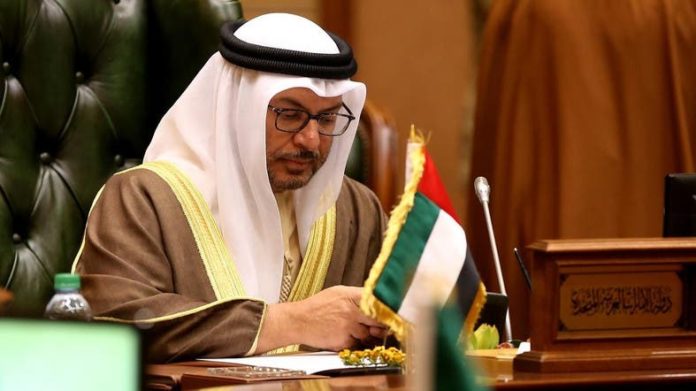 The UAE’s Minister of State for Foreign Affairs Anwar Gargash says Qatar’s complicity in an attack that was carried out in Somalia in May proves Doha’s ties to terrorism.

“In the Qatar crisis with its neighbors, the New York Times report on the mediator and the Qatari ambassador in Somalia documents Doha’s relationship with extremism and terrorism. The recording is dangerous and can not be denied with an urgent statement that was not accompanied by an investigation,” Gargash said in a tweet.

“Resorting to terrorism against the UAE is a regrettable escalation and affirms the correctness of the actions of the four countries [Saudi Arabia, the UAE, Bahrain and Egypt],” he added.

A businessman linked to the Qatari Emir told Qatar’s ambassador to Somalia that an extremist attack in May was carried out to advance Doha’s interests in the country against the UAE, an audio recording obtained by the New York Times revealed.

According to the New York Times report, in the recording Khalifa Kayed al-Muhanadi tells Qatari ambassador Hassan bin Hamza Hashem that “the bombings and killings, we know who are behind them.”

“Let them kick out the Emiratis, so they don’t renew the contracts with them, and I will bring the contract here to Doha,” al-Muhanadi says.

The ambassador then tells al-Muhanadi that the attacks were taking place “to make them run away,” referring to the UAE, whose Dubai state-owned port operator DP World has a presence in the Horn of Africa.

“Our friends were behind the last bombings,” al-Muhanadi replies. A suicide bombing in Bosaso in northern Somalia wounded at least eight people in May.

When asked by the New York Times about the recording, neither al-Muhanadi nor the Qatari government denied the authenticity of the phone call, which was secretly recorded by a “foreign intelligence agency opposed to Qatar’s foreign policies.”