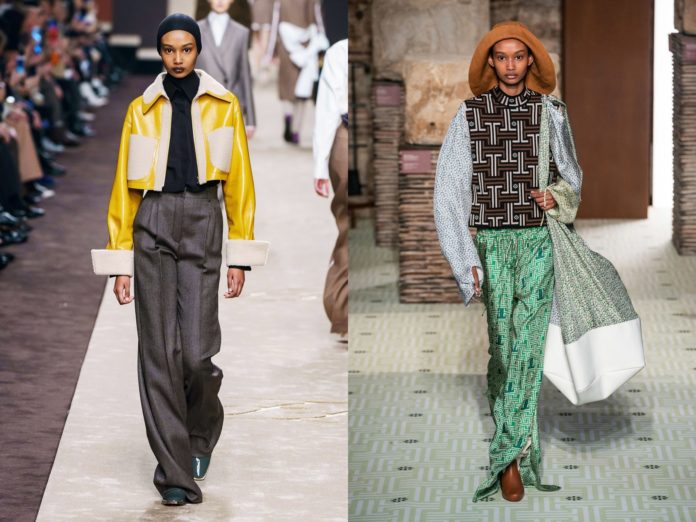 It was midway through Paris couture week when Ugbad Abdi realized her life was about to change forever.

The 18-year-old rising star was prepared to make her fashion debut when she was flown from Iowa, where she’d recently graduated high school, to the French capital to walk Pierpaolo Piccioli’s Valentino Spring 2019 extravaganza; what she didn’t plan for was coming face to face with one of her idols.

Despite her overwhelming excitement, Abdi maintained composure on the runway, gliding through Place Vendôme in one of Piccioli’s voluminous gowns with the poise of a seasoned pro. She was a natural alongside veterans like Campbell and Alek Wek, and her Valentino moment captured the attention of casting directors around the world.

Just months later, she was on hand at a majority of this season’s big shows—Burberry, Fendi, Lanvin, Simone Rocha, among them— becoming one of Fall 2019’s breakouts.

Currently making waves in Paris, Abdi’s still getting used to the pace of her new career. “The [biggest] challenge would be beating jet lag,” she says. “but I’m traveling to places I never thought I’d go to from a young age and experiencing different cultures.”

Like many emerging models, Abdi was discovered on Instagram. Though friends and acquaintances had encouraged her to pursue modeling since she was a pre-teen, Abdi wanted to wait and intended to finish high school in Des Moines and then take a gap year to test the fashion waters in New York. When she received a direct message from Next Models scout, Lacey Hevern, two months after graduation, it felt like destiny. “It was the biggest shock because I never thought it would happen so fast,” she recalls.

Within months, Abdi was kickstarting the season by opening Marc Jacobs’s proportion-focused fall collection in New York. “It still hasn’t hit me,” she says. “I almost started crying [backstage] because that was my first time walking for Marc Jacobs and to be opening the show was a huge deal for me.”

Born in Somalia during its civil war, Abdi spent her formative years in a Kenyan refugee camp where she was raised until the age of 9 before moving with her family to Des Moines, Iowa. Living in the camp had a profound effect on her relationship with her tight-knit family. “I never felt like I was missing anything from my life. We had friends, family, food and a shelter and that was all to be grateful for,” she says, recalling days spent playing traditional games with relatives and other children in the camp. Moving to the U.S. only strengthened the bond between her and her siblings, who she considers her biggest supporters. “I call my family after shows to tell them about it and almost every time I start to cry,” she says. “Tears of joy because this has been my dream and it [still] feels like I’m dreaming.”

Though Abdi was originally drawn to the fantasy aspect of fashion, the groundbreaking model is bringing real change. As a Muslim woman who chooses to wear hijab on and off the runway, she joins a new generation of models using their platforms to shift the conversation, including Halima Aden, Shahira Yusuf, and Kadija Diawara. Abdi has already become a force for change, becoming the first model to wear a headscarf during key shows like Fendi and Lanvin.

“Wearing my hijab kind of gave me a voice,” she says. “Almost every day I get people telling me, I can’t believe how successful you’re getting while being different… I even get people who don’t wear a hijab telling me that I inspire them. And that’s a huge honor for me because when I was younger, I needed that inspiration.”

Abdi credits Aden with breaking down barriers within the industry, and says her own work is just getting started. “I can only hope to change the narrative and the ignorance that Muslim women face daily,” she says. “This gives me a chance to educate people— it makes me feel like I can achieve anything all while staying true to who I really am.”