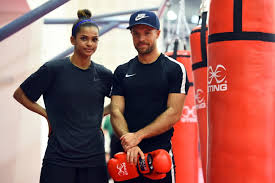 “Sometimes I feel like a shopping list of hardships, but if I didn’t go through all these difficulties, I wouldn’t be the same woman I am today,” Ali told BuzzFeed News.

Mogadishu-born Ramla Ali fled Somalia after the war broke out in the 90s, and like many refugees, she doesn’t know her exact date of birth.

Ali’s family moved to East London, where she was first introduced to boxing. She said she started boxing after she got bullied at school for being overweight.

Ali, who completed a law degree, boxed in secret and hid her bruises from her family as they didn’t approve of her boxing.

But over time, Ali’s profile grew, and it became impossible to keep it a secret. In 2016, she became the first Muslim woman to win a boxing title for England.

With help from an understanding uncle and a community that supported her, most of Ali’s family have come to approve of her boxing. Now, Ali will be representing Somalia, making her the first boxer to represent the country in international competitions.

Last year, she was highlighted by Nike as a global athlete and appeared in a campaign alongside singer-songwriter Jorja Smith.

Ali told BuzzFeed News that the obvious misconception female boxers face is that women are “more fragile, weaker, and less likely to stick it out in boxing.”

“The reality is female boxers are often more technically gifted and more willing to learn without putting their ego first,” she said. As such, Ali said she wants to see the “the media giants of this world make a conscious effort to promote and advertise more women in sport.”

Although becoming a boxer wasn’t easy for Ali, she said those obstacles were for the better.

“Sometimes I feel like a shopping list of hardships — from war in Africa, to bullying at school in London and being overweight, to not having that essential support structure at home that pushes you towards your dreams – but if I didn’t go through all these difficulties, I wouldn’t be the same woman I am today,” she said. “I wouldn’t appreciate what I have or take the time to recognize the highs and rewards that come through my sport.”

“Difficulties in sport are the same in everyday life though,” she added. “They don’t just disappear on their own, for instance, representing a developing country like Somalia on the world stage comes with its own battles.

“In all honesty though, I wouldn’t have it any other way. It might be the hard road, but you don’t overcome problems without facing them.”

The sport is everything to her, she said, adding, “If I didn’t have it, I would truly be lost.”

“Anyone can get physically fit and ready for a fight but competing in boxing is 99% mental and that’s what makes the difference,” Ali said. “It takes all your mental energy, but this is the most attractive aspect of the sport for me. In today’s age, when social media and technology plagues us with the constant need to interact and stay current and relevant, it’s the escape of boxing that enables you to really focus on yourself and better your health.”

Ali is representing a country, but has only one person on her team, her coach and husband Richard Moore.

“That’s how I want it,” she said. “It’s a crazy adventure, but we love it… To answer your question, you have to run at the problem to beat it.”

Although Ali has role models in the sport — noting that “Katie Taylor is the best on the professional scene, and she will forever be the best” — Ali herself has become a role model to young women who have been keeping up with her work on her Instagram.

“It’s a strange feeling, especially because there is so much I still have to achieve in the sport,” she said, adding that her other main goal in life is to raise awareness of health through sport in Africa. And if she can already do that to some degree, then she is proud to be thought of as a role model.

All of this though, wouldn’t have been possible without the women boxers who came before her, she said.

Ali said she sees women boxers on a regular basis during her travels around the world for competitions.

“It’s a huge community. You just need to know where to look,” she said. “The current crop of international amateurs who are working towards Tokyo 2020 Olympics will be the poster girls for a whole new generation of young women. I’m just thankful and grateful for the female boxers that came before me who had to endure those battles and pave the way for this generation to enjoy our deserved moment under those lights.”

Her advice for young women who are looking to get into boxing is to not just look for a boxing gym, but rather a coach, “someone who is committed to training you and someone you trust.”

“You’re both investing a lot of time and energy together, so it’s essential you enjoy the journey,” she said.

Ali added that it’s also worth attending some boxing shows to get a better idea of the sport.

Her biggest tip, though, is that it’s not at all about the level of boxing that one does.

“No matter the standard, boxing is a feeling,” she said. “If you get that enjoyment from just a boxercise class in a commercial gym, then that’s OK too.”