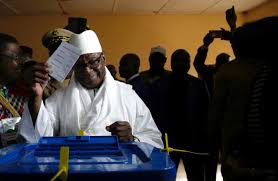 Ibrahim Boubacar Keita faces Soumaila Cisse after first round was marred by accusations of electoral fraud.

People in Mali are preparing to vote in the presidential runoff on Sunday.

Ibrahim Boubacar Keita is expected to return to power for another five-year term.

He is facing opposition leader Soumaila Cisse who trailed behind him in the first round.

The vote will take place amid fears of ethnic violence and accusations of election fraud.