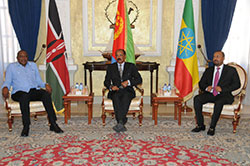 Asmara, 03 March 2019- President Uhuru Kenyatta of the Republic of Kenya and Dr. Abiy Ahmed Prime Minister of the Federal Democratic Republic of Ethiopia arrive in separate flights in Asmara in the morning hours of today, 3 February for an official visit.

Upon arrival at the Asmara International Airport the two leaders were awarded warm welcome by Presidents Isaias Afwerki and other Eritrean senior government officials accompanied with guard of honor.

The Kenyan delegation included the Kenyan Minister of Foreign Affairs and Ambassador of Kenya to Ethiopia.

The three leaders discussed on timely regional issues in a tripartite summit they conducted at the State Palace.

Prime Minister Dr. Abiy Ahmed and his delegation accompanied by President Isaias Afwerki and other senior Eritrean Government officials visited development sites in the Southern region including Logo and Misilam dams, diary farm as well as the solar system that is under construction in the area 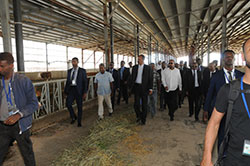