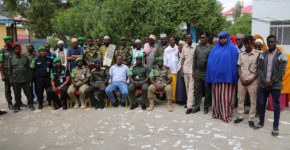 Kismayo, 30 August 2018 – Residents and security officers in Jubbaland state have resolved to promote community policing in their neighbourhoods to fight crime and counter violent extremism.

The resolution was made at the end of a two-day workshop attended by residents, police officers and pro-government regional forces.

The workshop is part of a sensitization programme on community policing in federal states, initiated by the police component of the African Union Mission in Somalia (AMISOM), to strengthen collaboration between security officers and members of the public.

Speaking during the workshop, AMISOM Public Information Officer, Philip Mukasa, said community policing has been tried and tested in many parts of the world and found to be beneficial to countries recovering from war.

“We as AMISOM Police together with SPF (Somali Police Force) in Jubbaland state is to work together with the community, with the youth, with the women groups, with police, with the Darwish and everyone ,” Mr. Mukasa explained, noting there is need to collaborate to improve security in areas liberated from the terrorist group, Al Shabaab.

The director general in the federal state’s ministry of security, Aden Yusuf Salah, echoed Mr. Mukasa’s sentiments saying the objective was to encourage synergy between the police and members of the public in crime prevention.

“In this training we shared knowledge and experiences on how to observe and maintain security and prevent bad elements who bring insecurity in the community,” Mr. Aden observed.

The Chairperson of Kismayo Women Organization, Sureer Mohamed Ali, stressed the importance of involving women in countering violent extremism and urged AMISOM to organize similar trainings in other regions.

“This is a very useful [workshop], which we embrace and we are ready to support the security forces. Women are the mothers of youths brainwashed by the extremists, and have the potential to lure them back,” Ms. Sureer added.

Somali elder, Ugas Abdirahman Ugas Khalif, described extremism as an unacceptable behavior that has no place in Islam and appealed to residents to work closely with security forces to tackle the vice.

“We know the religion of Islam is a peaceful religion which accords everybody his right. They [extremists] advance their radicalization efforts using Islam as a cover up. Extremism has no place in Islam,” said Ugas Abdirahman.