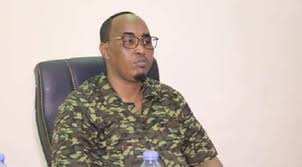 Jubaland state security minister on Wednesday vowed that Jubaland troops will recapture Belet Hawo which is now under the control of Somalia’s Federal Forces.

Abdirashid Janan has threatened that his troops will takeover the control of the town in skirmishes with the SFG forces in Gedo region.

Janan made the remarks during a security meeting with officials of Gedo region.

He urged locals to immediately leave from the town and seek a safe sanctuary while Jubaland troops are about to launch a raid.

He blamed for the recent clashes by the outgoing Somali president, Mohmed Abdilahi Farmajo.

Somalia’s Govt accuses the troops led by Janan as rebels funded by Kenya.

Kenya repudiated the allegations from Somalia claiming that it supports the rebels in Gedo region.