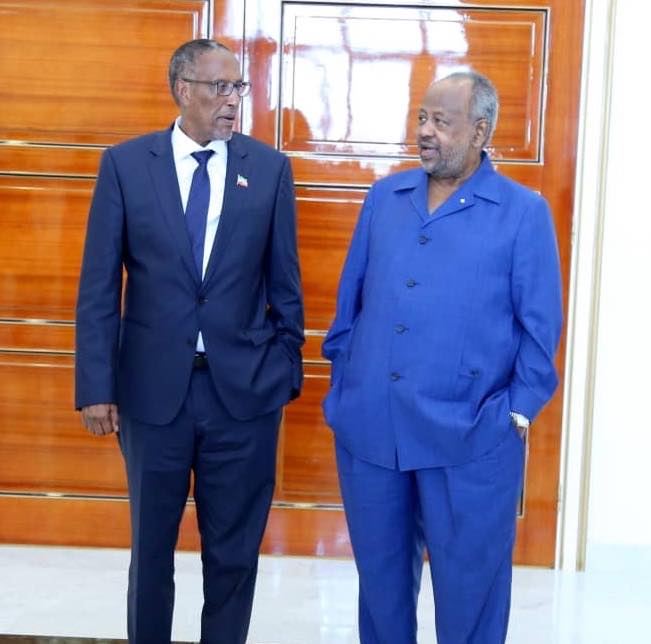 Lewis Center, Ohio—-The little dictator of the tiny African state Djibouti, Ismail Omer Geulleh also known as IOG, is seeking to host the talks between Somaliland and Somalia to decide their future relation. But there are compelling reasons why IOG could not  act as  an honest broker for  those talks. He has a vested interest the outcome of the Somali conflict. He deployed his own troops in Somalia, under the premises of the African Union Mission (AMISOM), to back one faction or clan of that perpetual war, just for one reason, to recreate Somalia, including Somaliland as a part of it.

Doing so he believes would benefit the economic and political interest of his cronies. He is scared of a free, democratic, and debt free Somaliland becoming the economic and logistic hub of the Horn of Africa.

This week IOG’s rogue agent in Hargeisa has threatened Faisal Ali, the leader of Welfare and Justice Party, for calling out the true intentions the Djibouti dictator. This moron a does not know, unlike Djibouti, Somaliland is free country. We have a robust opposition party, and we debate issues, including foreign policy. We know your boss, IOG, hates freedom and free people. IOG’s agent language not was only undiplomatic, but also filled with anger and hostility.

IOG has been misruling the impoverished country since 1999 through security state apparatuses, government run propaganda, and restricting or shutting media. IOG uses the police, the revenue agency  and the courts as a vehicle to  racketeer and extort money from business communities and to eliminate or even shutdown those whom he deem enemy of the state.

Nowadays, in an overt and subtle ways, OIG has succeeded having influence in Somaliland. He’s  using extortion to lure greedy merchants and unscrupulous politicians and clerics to undermine Somaliland integrity. He’s also using access to banking services, passport and now even now broadband internet services as a leverage against Somaliland. Some of Djibouti Banks have become a haven for the corrupt Somali politicians and rapacious merchants lo launder their ill gotten money.There are many faith, business and political leaders travelling with Djibouti passport.

For instance, he appointed Mohamed Aw-said, a used cloth vendor turned communication operator as his internet provider for Somaliland. But there are reports that they went separate ways because of conflict how to share the spoils of the internet profit or dispute over different transactions. By some estimates, IOG and his wife receives a whopping profit from Somaliland internet services alone.

Right away, IOG has recruited the greedy merchant, Dahabshil Group, which opened a bank this year in Djibouti, to replace Mr. Aw-Said as the agent of the internet provider for Somaliland. IOG is treating Somaliland and its leaders like region of Djibouti because Somaliland’s corrupt politicians and shady merchants are doing his bidding.

Why our government is relying on our vital communications link on a small country led by a despot that considers Somaliland   as region of the unstable Somalia?

We are so fed up with the endless catering to this belligerent, greedy bully. What is wrong with Somaliland leadership?

It is obvious our leaders are putting the profit of the greedy merchants over  our national security. This is a very troubling.

A lot of Somaliland people, especially young generations, who were born after 1991 did not know the shady background of IOG .

But here are some of the facts that we want share with you: Djibouti, a former French Somaliland, has only had two presidents since its independence in 1977 from France. In fact, IOG, a former intelligence officer, was a handpicked successor of his uncle, Hassan Guleid Aptidon, the first president of Djibouti.

The Djibouti regime had hosted in Djibouti numerous peace conferences for Somalia’s rival factions, after fall of the authoritarian Somali military regime, in 1991. None of those conferences produced any tangible results, except more division, more conflicts and terrorism. Peace and stability in Somalia still is allusive because all of those peace talks were a sham.

IOG and his uncle had also collaborated with Siad Barre’s violent campaign to crush people yearning for freedom in northern Somalia , in exchange for a cash and promises of economic support from Siad Barre regime. There was agreement between Siad Barre and Djibouti to develop oil and Gas well in Salel region, near Ceel-Gaal village, and to export it through the Djibouti port, in 1980’s.

To reward for heir collusion, the Somali Commercial Bank in Djibouti provided IOG and his henchmen millions of loans to open businesses and to build luxury villas along the beach. In fact, in 1988, IOG alone got a 700 million Djibouti franc ( $5 million) loan in which he used to build the ‘Haramuus’ presidential villa that  he’s living now.

None of the millions that were looted from the Somali bank were accounted for or recovered.

In 1988, IOG, as the head Security police, denied refugees, including Djibouti citizens, fleeing from slaughter of Siad Barre troop in northern Somalia, for a safe haven, because of their clan identity.IOG’s malice actions, the lives of many innocent people were cut short.

After the fall of the Somali despot, Siad Barre, the Djibouti regime waged to campaign to undermine the peace and reconciliation efforts led by the victorious Somali National Movement (SNM). He organized Issa clan militias and the remnants of Siad Barre troops to destabilize Salel region, for the purpose to control the Chevron oil wells.

Moreover, on March 1995, there were credible allegations that IOG operatives were responsible for the assassination of Somaliland Justice Minister, Abdillahi Giire Robleh  aka “Jeex” (Issa), who was supporting President Egal’s efforts to  restore  peace, and law and order  in Salel region.

For the record, most of Issa traditional elders and communities inside Somaliland were supportive and provided sanctuary for SNM fighters during the civil war. But after the victory from the tyrant, our leaders have abandoned them to pander Gada-Buursi votes. As the result, they lost their ancestral homeland—-Salel region because of the land grab orchestrated by Vice President Zaylici.This is unacceptable, and we must reverse it.

We must understand the person that we’re dealing with in the first place: IOG is a greedy, arrogant bully, and hoarding money by any means is his passion. All of his relationship is based on transactions. He is in debt to the communists China, which is taking over the jewel of his port, Doralah Container Terminal.

Most of media in Somaliland that promulgate IOG’s propaganda have become so corrupt to report his horrendous record.

But we concluded that the little Djibouti dictator, IOG, is not Somaliland’s friend. He has no decency and respect for his fellow countrymen or his neighbors.

The only way to stop the extortion of OIG on Somaliland is hold accountable our corrupt politicians and to boycott greedy merchants, who are doing his bidding. It is also time our leaders to put our national interest before profit, and to defend and protect our hard fought freedom and independence from the blatant assault and interference by IOG and his enablers.