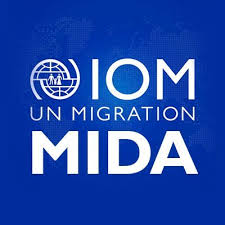 Mogadishu – The International Organization for Migration (IOM) today (14/12) signed a new cooperation agreement with the Federal Government of Somalia, which underlines both parties’ mutual interest to strengthen cooperation and to work together on migration issues to promote economic and social development.

The agreement was signed in Mogadishu by IOM Regional Director for East and Horn of Africa, Mohamed Abdiker, and Somalia’s Minister of Planning, Investment and Economic Development, Gamal Mohamed Hassan. It renews an earlier agreement signed between the two parties in 1983 which focused on implementing programmes designed to reverse the impact of brain drain in developing countries like Somalia.

Thirty-six years later, IOM’s programme footprint has grown in Somalia. With over 450 staff across six regions of the country, IOM has been providing life-saving humanitarian services to crisis-affected populations, promoting durable solutions to displacement for IDPs and returnees, and supporting community stabilization and early recovery activities, while steadily supporting programmes related to long-term recovery and migration governance and development.

The recently launched Mission Strategy 2019 – 2021 is a testament to IOM’s commitment to working closely and strengthening its partnership with the Government of Somalia in line with the country’s National Development Plan.

For his part, Abdiker highlighted the significant gains the Government and the people of Somalia have achieved over the past decade. He stressed the readiness of IOM to support the Government in achieving its development goals, including its commitments to SDGs and the Global Compact for Migration.