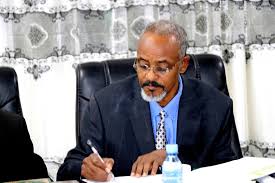 The two-day workshop is expected to publish the proficient abilities of the sectional heads in as far as administrative capabilities are concerned.

Mr. Abdihakim Sulub who works in the Emirates as a consultant in the said field is the main tutor at the seminar. The Director General of the ministry Dr Osman Hussein Warsame notably pointed out the need of a competitive stewardship in implementing ministerial or government policies.

“I have convened this workshop for the need of having a competent stewardship for daily administrative procedures hence apt implementation of the state (or) ministerial policies”, said the Director General.

He similarly noted that the since the sectional heads happen to be the hub in which axles of the ministry roll they ought to be well equipped with skills of running their dockets.

More importantly, the minister stated that the course was not a solitary one but is the beginning of an on-going process that is expected to sharpen and upgrade their proficiency in leadership and management.

So too, he added, would similar courses be extended to the general staff with various responsibilities in the ministry such that they may also be skillful.