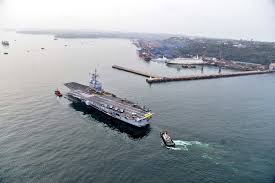 End of this month, India and France will hold anti-submarine warfare games off Djibouti coast near the Horn of Africa, as part of the 17th edition of the bilateral Varuna exercise series which is currently underway. Official sources also said that India’s request for access to Djibouti naval base for refits has been informally cleared with the Djibouti government.

“The first part of the Indo-French joint naval exercise, Varuna 19.1, will be conducted off the Goa coast from May 1-10… The second part, Varuna 19.2, is scheduled to be held at the end of May in Djibouti,” Indian Navy said in a statement issued on Thursday.

As reported by The Hindu earlier, under the Mutual Logistics Support Agreement (MLSA) signed as part of its foreign cooperation initiatives, the Indian Navy has sought access to the French base in Djibouti for refit and refuelling. However, as Djibouti is a sovereign country, its clearance is needed for Indian ships and the onus to get it is on France. “It has been informally done,” diplomatic sources told this newspaper.

Interestingly, several countries have bases in Djibouti, and China opened its first overseas base there last year.

Phase I will see the participation of INS Vikramaditya and French carrier FNS Charles de Gaulle and the two air wings, comprising Mi-29Ks and Rafale-M, will perform joint drills.

In addition to the carrier, France has sent two destroyers, FNS Forbin and FNS Provence, the frigate FNS Latouche-Treville, a tanker FNS Marne and a nuclear submarine.

The exercise will be conducted in two phases. The harbour phase at Goa would include cross-visits, professional interactions and discussions and sports events and the sea phase would comprise various exercises across the spectrum of maritime operations, the Navy stated.

Apart from carrier drills, other focus areas during the exercise are explosive detection, mine hunting and protection of offshore assets, a specific are of interest for France. The bilateral naval exercise was initiated in 1983 and was christened as ‘Varuna’ in 2001.

Of late, submarine hunting has become a major area of focus for the Indian Navy in its military cooperation with major countries.