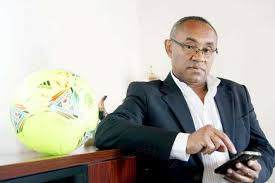 DJIBOUTI (AP) — The president of the African soccer confederation has denied allegations of bribery against him made by a high-ranking official at his body who was then fired.

CAF president Ahmad, who goes by one name, said he had no control over finances at the confederation after former secretary general Amr Fahmy accused him of bribing presidents of African national soccer associations and misusing hundreds of thousands of dollars.

Fahmy was fired last month for “misconduct” but CAF didn’t release details of any disciplinary case against him. Fahmy reportedly sent the allegations against Ahmad to FIFA, where Ahmad is a vice president, but the world governing body has not announced any ethics investigation.

Ahmad said Wednesday on a visit to Djibouti that “when you talk about the management of finance at CAF, the president is not responsible.” He said Fahmy, as the secretary general, had control over CAF’s money.

Ahmad also responded to allegations that he misused money to buy himself two luxury cars, one in Cairo where CAF is based and one at home in his native Madagascar. He said he had two cars because flying one to and from Egypt “is expensive.” He said he needed the cars because “CAF is a very big institution and this means the image of the CAF president is very important.”

Ahmad became head of African soccer in 2017 after beating longtime president Issa Hayatou in an election. He promised to clean up African soccer’s corruption-tarnished reputation but he has been criticized for his leadership, sometimes by senior officials within his organization.

Ahmad said “I cannot explain myself … to everybody.”