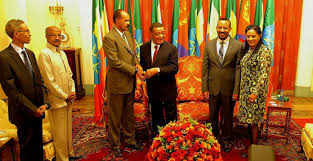 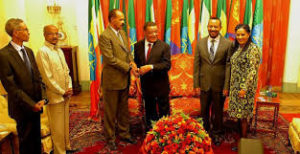 In the capital of the UAE, Abu Dhabi a tripartite meeting was taking place
between the host country plus Ethiopia and Eritrea. That meeting was
summarizing the recent historic agreement between Ethiopia and Eritrea to
bury their hatchet; however it was still too early to speculate the forces
or powers behind the scene that had lobbied for the peace.

Many people were looking for the answer about the country that had played
the pivotal role to bring Eritrea and Ethiopia to the negotiation table. It
was obvious the UAE and Saudi Arabia were the kingpins behind these new
diplomatic victories however it will be problematic to underscore the main
power maneuvering behind the scenes was the US government.

The heir to the UAE throne Mr.Mohammed Bin Zayed met with the Ethiopian PM
Mr.Abiy Ahmed and Eritrean president Mr.Isaias Aferworki at the palace. The
two leader were bestowed the highest accolades given by the UAE government
to foreigners.

The agreement between these two countries is believed will usher a new era
of political stability in the Horn of Africa region which has always been
handicapped by an arms race.

The places that these new change of affairs in the Horn region may affect
are Somaliland and Djibouti. Djibouti for instance is wallowing in
political uncertainties following this change of state in the Horn of
Africa. The Djibouti foreign minister Mr.Mohammud Ali Yusuf sent letters to
Djibouti diplomats abroad informing them that it will be wrong for remove
sanctions on Eritrea.

According to Daily Nation Newspaper of Kenya in an article it wrote
yesterday about Djibouti dilemma on Ethiopia and Eritrea agreement reported
that last week that the Djiboutian Foreign minister was saddened by the
Ethiopia’s government ploy to use her position in the UN Security council
to lobby for Eritrea sanction to be lifted.

Djibouti’s FM said that if Eritrea sanctions are lifted they are going to
have far reaching repercussions on his country.

The Daily Nation report went further to say that the details of the FM
letter that Daily Nation’s reporters got a copy state that Mr. Mohammud
lamented that the Ethiopia government was hasty in her decision to vouch
for Eritrea sanctions to be lifted since Eritrea has made a habit of
undermining her neighbors through military incursions.

Djibouti feels that this agreement is not good news on her behalf. What
worries Djibouti is the country that has mediated between Ethiopia and
Eritrea which is the UAE hot in the heels of Djibouti government
cancelation of UAE conglomerate DP WORLD contract to manage the port of
Dorale. The government of Djibouti sees this new reality that the UAE has
funded and used her diplomatic influence on the Ethiopia/Eritrea agreement
so that it could exert economic pressure and strangulations to Djibouti
economy by sidelining it economically, politically and diplomatically.

Recently the Gulf countries crises Djibouti sided with Saudi Arabia and the
UAE, this forced the government of Qatar that used to police Djibouti’s
border with Eritrea to recall her military. Eritrea seized that opportunity
to grab more land from Djibouti; this has further added fuel to the fire of
the already deplorable situation. Djibouti claims that Eritrea has amassed
her military at the border between the two countries.

The second bone of contention is that Ethiopia may start importations of
her cargoes from Eritrea because Djibouti has restricted Ethiopia’s
importations and exports from her port and put in place quotas for
Ethiopia’s import and export business. Djibouti is the only country that
has benefitted from the Ethiopia/Eritrea conflict.

Another issue is that the US government may set up a military base in
Eritrea this will bring bad omen to Djibouti’s US camp.

The UAE had before threatened to return Djibouti to the old bad days of
underdevelopment since her investment into the Djibouti port catalyzed
Djibouti to prosperity.

The second country that will face the brunt of this new development in the
Horn of Africa region is Somaliland following the recent takeover of the
Berbera International Port by UAE multinational DP WORLD. The company
granted Ethiopia 19% stake at the port of Berbera, the UAE wants to make
Ethiopia her biggest customer.

Many people believe that the Ethiopia/Eritrea agreement will change the
earlier plan by UAE to make Berbersa International Port as the main port
for Ethiopia to import her goods. The UAE also has set up a military base
at Berbera.