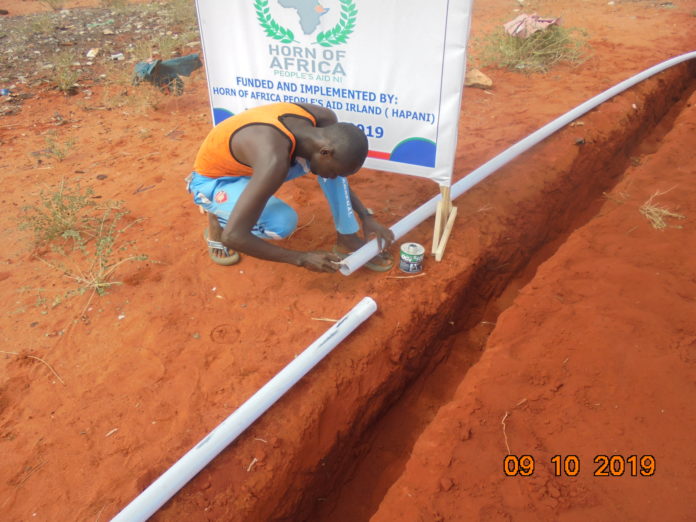 In happier times the fertile red soil of Galgadud Statein Somalia afforded opportunity to grow an extensive range of produce, as well as providing grazing for some of the country’s many pastoralists. Civil War and drought have wreaked havoc and caused untold suffering, especially among Internally Displaced Persons (IDPs), many of whom had fled Mogadishu and its surrounding areas in search of safety. Whilst accurate figures are hard to come by, it has been calculated that there are circa 2.6 million IDPs in Somalia, many of whom live in dire poverty. As war has washed over Somalia and other parts of the Horn of Africa IDPs have become like a human flotsam and jetsam that are routinely ignored or overlooked. For those families and individuals who settled in Abudwak in the northwest of Galgadud circumstances have been grim and often seemingly without hope, that is until the Somali Relief Fund (SRF) and a British NGO called the Horn of Africa People’s Aid Northern Ireland (HAPANI) set about their transformative humanitarian work.

IDPs in Somalia as elsewhere are invariably marginalised and face multiple challenges. Whilst they are remarkably resilient, each has a sense of loss, whether this be of home, of their animals (some 90% of livestock has died due to recurring drought) and at times an overwhelming sense of hopelessness. Access to clean water, education, food, fuel and shelter from the elements are all problematic. IDP families will spend several hours each day to collect precious firewood to cook their food, if they are lucky enough to have food to prepare, that is.Then of course there are concerns around even the most basic healthcare and the absence of employment opportunities. Matters are made worst by the fact that IDPs have often fled to remote locations, many of which are perceived to be unsafe and thus deemed beyond the reach of local and international NGOs.The situation is often very stark indeed, with IDPs feeling as though they have been forgotten by the world.

At Abudwak the number of IDPs has been swollen not only by those who have fled violence in urban centres, but by nomads who are suffering privations due to drought, disease and the loss of their animals. The Barre-Dheere IDP camp in Abudwak currently comprises some 250 families plus orphans and others, 60% of those living there being female and 75% of camp residents being under the age of 20. As well as legitimate concerns around malnutrition andhealth (especially child and maternal health), there is a pressing need for education, something that can provide hope and improve opportunities.

In 1998Nasir Ahmedof theSomali Relief Fund visited the Abudwak community, at the time no single child was going to school except for some children attendingrudimentary Koranic schools. Mr Ahmed met many children on the street and asked them what they wanted to be when they grew up, the age of these children being between 6-17 years old, they laughed and giggled, they could not come up with an answer, finally one of them raised his hand, and said; “ I want be a Daba Ka Fuul which means in Somali a truck driver’s assistant. There were no other professions they could think of.Recognizing the dire need for education, SRF and the Abudwak Diaspora, including HAPANI’s Founder, workedtogether to start schools in the area.In August 1999SRF recruited 16 teachers, made a public announcement that all children and young adults should come to school, incredibly 850 students attended the first day of school. The school classrooms did not have desks and tables, and some of classes were conducted under acacia trees; fast forward to today and some of the alumni of those who attended the first class in 1999 are doctors and other professionals.Improving and investing in human capital through education is the most important task that any government can do, yet in conflict zones it often falls to NGOs and community groups to do what they can to meet the need. Such educational initiatives speak volumes about what can be achieved providing that there is the drive and determination to seek to make a difference and empower those with a hunger to learn.No one should underestimate that such a hunger for learning exists.

The Somali Relief Fund has been active in Adudwak since the 1990s and HAPANI since 2011. With the passage of time the demand for their assistance has grown, and whilst some of this has involved an emergency feeding program for the neediest families, much of the work has been focused on improving resilience and empowerment. HAPANI has invested in the development of several projects in Abudwak, including water access schemes, clinicsand schools. Currently these endeavours have created 100 jobs locally, providing precious opportunities and most importantly helping give people an income and a sense of purpose. Funding these initiatives undertaken by HAPANI and SRF will play a major role in realizingfuture goals, especially in respect of creating employment. Creating any form of employment for young people can be a game changer, especially as youth unemployment and under-employment is fuelling the exodus of young people in the Horn of Africa, who risk their lives to try and reach Europe in search of work and a better life. Scores of young people are drowning in the Mediterranean Sea trying to reach Europe, the root cause of this Sub-Saharan African youth exodus beinga lack of opportunities.

An important aspect of HAPANI’s work has been that considerable emphasis has been placed on encouraging girls and young mothers to go to school. It is a fact that once girls receive an education the prospects for the health and well-being of any future offspring will be considerably enhanced. In addition, schools afford an opportunity to improve general literacy as well as raising awarenessconcerning female safety.

HAPANI holds regular meetings withstakeholders, including the elders, women and youth. Once the community identifies its needs, HAPANI’s local personnel carry out a field assessment with a followup consultation meeting where the IDPs articulate their priorities and are encouraged to be apart of the solution. Through the trust it has developed and its understanding of the local dynamic HAPANI has identified a number of areas for focus:

In addition, there has been a growing awareness of environmental degradation and climate disruption and HAPANI and SRF have developed a 20hectare nature reserve in Abudwak. Drought tolerant nativespecies have been planted along with 500 acacia trees. During the month of August-October these acacia trees provide what is called Abqo in Somali, these areseed pods, these pods then become fodder for the IDPs’ milking goats.In the area of solar energy solar lanterns have been purchased from China, these lanterns are supplied to IDP families, so that children can learn at night. As numbers of IDPs continue to grow in Abudwak and its locality HAPANI is now working to raise funds to purchase a solar powered water pumping system. Access to water is vital for irrigation, livestock and for communal hygiene.

HAPANI’s Abudwak IDP Survival & Livelihood Pilot Projecthas the potential to become a template for similar initiatives with IDPs across the Horn of Africa and further afield. One of its many strengths is the degree to which IDPs are given a voice and thus feel empowered. It is already working to help families to become self-sufficient. One of its innovative projects is that of proving 250 families with plots of land where they will be trained to garden using greenhouse technology. Fortunately,there is adequate land near the Barre-Dheere IDP camp to make one and a half acre plots available to each family. For the families that choose to work with greenhouses (8 x 16 meters), the necessary tools and materials will be provided through HAPANI’s fundraising activities. Importantly a trained agronomist will be hired from Mogadishu to teach greenhouse skills to the IDP families. The greenhouses will grow high-value crops such as tomatoes, sweet peppers, cucumbers, onions etc. Composting will be introduced as part of the program. HAPANI aims to change the phenomenon of IDPs staying poor and destitute for life. The project will also teach the IDPs and the community at large the techniques of rainwater harvesting. A rainwater harvesting pond will be constructed. Once the pond is filled with water, the IDPs will be shown modern principles of drip irrigation. The agronomist will also be responsible for teaching these skills.

Over the past two decades remarkable progress has been made, often against the odds. It is worth remembering that when schooling began at Abudwak it was under the acacia trees and yet
Abdinur Ali, one of the first students enrolled in the school, is now a dentist.Whilst some amazing progress has been made at Abudwak the plight of IDPs nationally and internationally remains largely overlooked. HAPANI is anxious to consolidate and expand its work and thus needs additional funding and support to continue its remarkable initiatives. To date it has been calculated that HAPANI and SRF have assisted 4,020 families, a splendid achievement by anyone’s standards. To their credit HAPANI and SRF have stood by the IDPs of Abudwak through thick and thin and are committed to long term projects that are proving transformative in nature. So much has been achieved, but with additional funding the lives of many more IDPs can be enhanced. Suleiman Abdulahi, HAPANI’s Founder and Director is passionate in his desire to make a difference; “HAPANI strives for sustainability, we focus on long term projects, we will not disappear if the funds run dry, we stay with the communities we help and our proud that our projects are run by the communities themselves.” What is being done at Abudwak deserves wider recognition, for herein lies a charitable endeavour that is enabling people to not only survive but thrive. Somalia and the world need more such transformative initiatives.