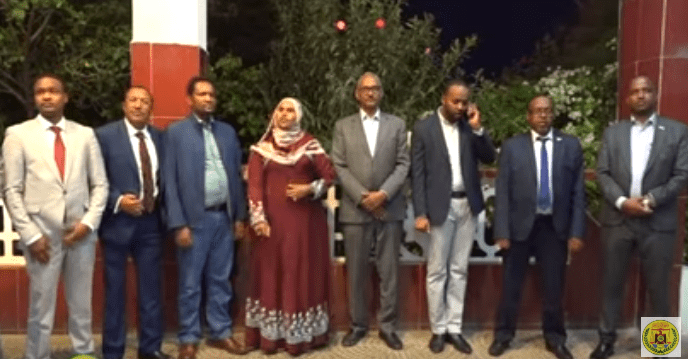 High level delegation from Ethiopia’s Oromia region headed by its deputy female president arrived in Somaliland yesterday.
The mission of the delegation from Oromia region came to Somaliland in order to participate Somaliland Trade Expo which had kicked off on Thursday in the capital.
The delegation was welcomed by trade minister, deputy minister for foreign affairs and head of SL liaison office to Ethiopia.
SL head of mission to Addis Ababa had told that the goal behind the visit embarked by the delegation from Oromia is to attend the trade expo that commenced in Hargeisa.
He added that the objective behind holding the trade exhibition is to motivate local traders and the products of local industries.
Another high level delegation from Somali region of Ethiopia will be received today in Wajale, a border town that links Somaliland to Ethiopia.
They are expected to participate the trade exhibition.
The Oromia delegation is expected to travel to Berbera in order to inspect the port operations.
Mr. Mohamoud Hasan Sa’ad alias Sajin, the trade minister while greeting the delegation from Oromia had welcomed to Somaliland.
The minister had revealed that Somaliland has close trade cooperation with the two regions in Ethiopia.
The deputy female president of Oromia told that she sees Somaliland as their second home.
She promised to hold talks with government officials and will discuss ways to further forge the cooperation.
” Somaliland is our second home. I feel that I am at home. Thank you for the cordial reception.” She said
The deputy president of Oromia region further said that she will meet with Somaliland officials in order to discuss ways to boost the cooperation on the development of the two communities and the economy.