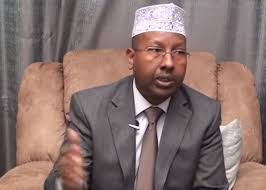 Galmudug state security minister, Ahmed Moalim Fiqi has announced that he escaped from an assassination plot.

Fiqi said: “Al shabab militants group set up an explosive device at my car with the intention of killing me. I am safe and sound. We have detained the perpetrator who was behind this heinous incident.”

He urged Galmudug residents to cooperate with security forces in Galkayo in a bid to box out terrorist elements who pose threat to the safety of the public and that of the region.