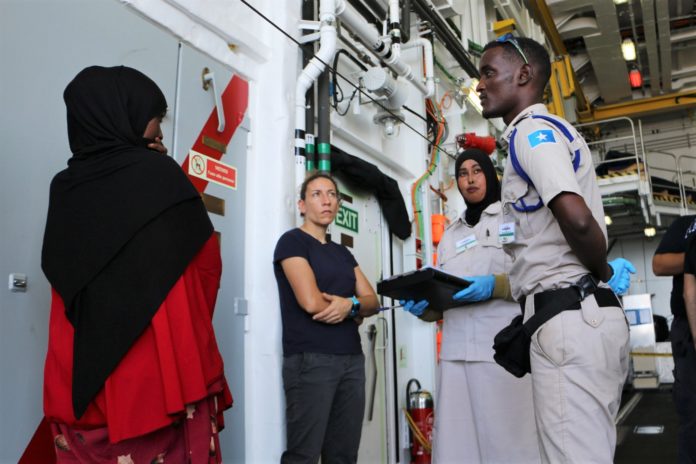 First came a distress call from the Captain of “MV Moll”- his vessel had been hijacked and a rape had taken place. That call triggered the training scenario set up during the MACRILEX exercise, co-organised by EUCAP Somalia, EUNAVFOR Operation Atalanta and UNODC.

MACRILEX (Maritime Criminal Justice Chain Exercise) was conducted over six days between 25 September and 17 October in Mogadishu. There were 24 participants altogether, including three women, from the Somali Police Force (CID, Interpol NCB and the Maritime Police Unit), the Banadir Regional Court, the Ministry of Justice, the Attorney General’s Office (AGO) and the Bar Association. 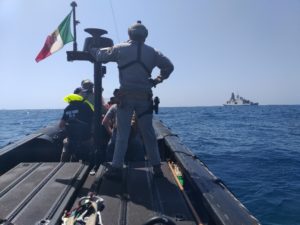 The participants familiarized themselves with all the phases of the criminal justice chain, starting with the distress call from “MV Moll”, the allegedly hijacked vessel and analysed the intelligence from various sources like EU CRIMARIO IORIS system, an Interpol Blue Notice, police reports and radio communication. After the decision to board the vessel was made, the attendees had a chance to get out of the classroom and board the EUNAVFOR vessel ITS Marceglia, which played the part of “MV Moll”.

The boarding team from the Mogadishu Maritime Police Unit and CID of the Somali Police Force administered first aid to a casualty, managed the crime scene, seized evidence, conducted initial interviews and made arrests.

Next day, participants learnt about Crime Scene Management and Forensic Evidence, they then interviewed “Araale” and “Bulle” the alleged suspects who were arrested on board “MV Moll” as well as the “witnesses” and “victims.” The suspects were charged with various offences, including rape and taken to court which was also a part of the exercise.

On the final day, the participants drafted recommendations, based on lessons learnt throughout the exercise. It became clear that the development of common positions and procedures across the Somali criminal justice chain is a vital element of moving it forward. For example, the participants agreed that there is a need to operationalise the arrangements of information sharing and decision-making when multiple law enforcement actors like the Maritime Police Unit, Interpol, AGO and CID are involved. Participants also stressed the need to enhance the forensic evidence handling capacity of Somali police and justice authorities.

When discussing the legislative framework in Somalia, the participants identified numerous areas of development in the field of substantive and procedural criminal law and international co-operation. It is quite clear that further consultations are needed on legal reform initiatives related to hijacking, anti-piracy, sexual and gender-based violence to ensure that that proposed legislation is fully adapted into the Somali context and in line with international standards.

A legacy platform working group will continue discussions on recommendations agreed during the MACRILEX exercise. 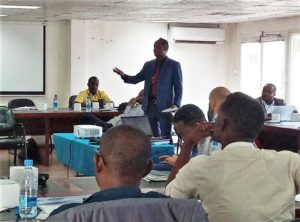 The MACRILEX training concept proved to be an efficient way to bring together different actors of the justice chain and EUCAP is planning to conduct the same type of exercises in the other field offices. The most important thing is that the lessons learned during the exercise will be put in practice and the participants will actively use their new skills.

As the Head of Mission Chris Reynolds said during the closing ceremony of the exercise: “Law enforcement is ultimately a question of will. How you put to use the lessons learned here in the past days, is up to you. EUCAP is ready to support you in your efforts to strengthen the criminal justice chain in Somalia.” 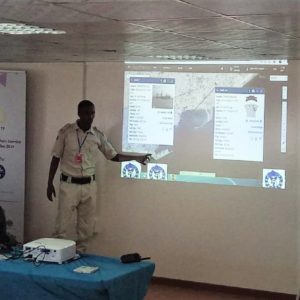 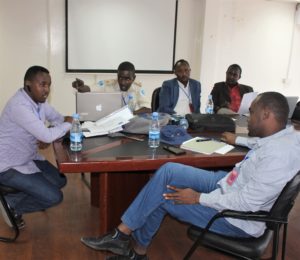