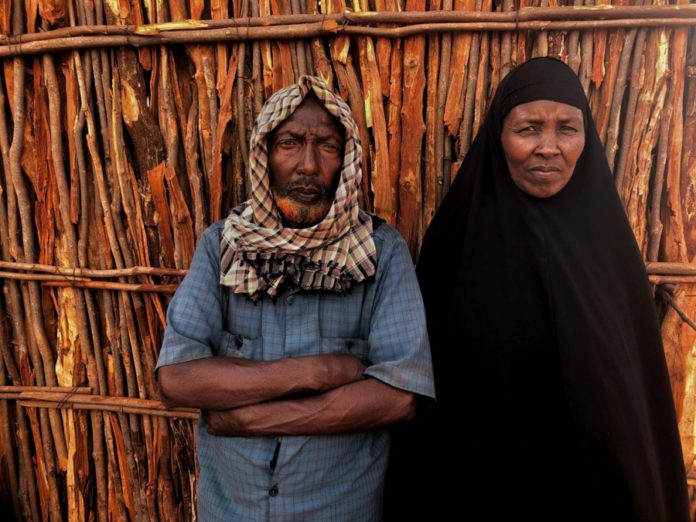 Mohamed Elmi and Halima Mohamed, the uncle and mother of Abdulkadir Elmi, stand outside a relative’s house in Kutulo.

KUTULO, Kenya ⁠— As the newly elected representative for this remote village of sheep and camel herders out in the expanse of Kenya’s red-sand borderlands with Somalia, Issa Ahmed Abdi decided to dig a well for his community.

But the drill made a lot of noise ⁠— “like a chopper or a tank,” he recalled. “Mothers were running away with children on their backs, like terrified antelope. I had to go into the bush to convince them it wasn’t the military.”

The people who live here are Kenyan citizens, yet they say they fear their country’s military more than al-Shabab, an extremist group that controls the area across the border as well as most of rural southern Somalia, imposing a strict Islamic code and drafting young men into its battles.

Eight years into Kenya’s U.S.-backed offensive to combat al-Shabab, both in Somalia and domestically, residents of Kutulo say the Kenyan military is fighting terror with terror. They say the Kenya Defense Forces, or KDF, regularly round up noncombatants from Kenya’s ethnic Somali population as a form of collective punishment for al-Shabab attacks on Kenyan soil.

Some detainees are released and sworn to silence about their interrogation. But sometimes a neighbor finds a decomposing body on the side of a road days or months later. Other times, the hyenas that prowl the desert get there first. Human rights groups, local media and the United Nations have documented dozens of allegations of abuse by the Kenyan security forces, including 88 cases of alleged enforced or involuntary disappearance since 1980.

Allegations of abuses against ethnic Somalis have dogged the KDF for decades ⁠— starting long before it sent troops into Somalia in 2011. Experts have warned that their clampdowns often serve to radicalize populations instead of contributing to peace, but the KDF has always denied any wrongdoing and rejects any link between its activities and radicalization.

In Kutulo, residents estimate that al-Shabab has recruited hundreds from the area in just over a year, since a local religious teacher was arrested by the KDF in the neighboring village of Aws Mudul and later found dead by herdsmen on a remote dirt road.

“The KDF does what it wants,” said Mohamed Elmi, the uncle of Abdulkadir Elmi, 34, the man who was killed. “No one has ever stopped them. Even tonight we will barely sleep, out of fear of them.”

The U.S. government has given Kenya’s military tens of millions of dollars’ worth of training, equipment and other support over the past eight years and “regularly stresses the importance of respecting human rights with all of our Kenyan counterparts at all levels,” said Lt. Cmdr. Desiree Frame, a spokeswoman for U.S. Africa Command. The U.S. military has at least 200 service members in Kenya.

A home in Kutulo, a small Kenyan village about 20 miles from the border with Somalia, shown earlier this month.

Presented with specific allegations made by residents of Kutulo, the KDF issued a blanket denial that its soldiers had in those instances or ever committed such abuses. In a statement, the KDF said any credible allegations would be referred to the Kenya National Commission on Human Rights, a watchdog set up by the government.

Jedidah Waruhiu, one of the commissioners of that body, said the KDF has not referred any allegations to her office, nor has the KDF cooperated with her investigators when she has brought them complaints from community members.

“We have not been able to complete one investigation of the KDF,” she said in a phone interview. “They have refused us access or cooperation in every case. It frustrates our work greatly.”

The Kenyan government has also refused to cooperate with the office of the U.N. special rapporteur for enforced disappearances.

“There are a number of countries that do not cooperate or cooperate only formally with the (special rapporteur’s office), for instance by providing standard replies or plainly denying allegations,” a September report by the United Nations’ forced-disappearance working group said. “For instance, Bangladesh, Eritrea and Kenya have not cooperated … and (North Korea) has sent standard replies.”

Abdulkadir Elmi’s mother, Halima Mohamed, remembers the day she got the news her son had been picked up by the KDF. Al-Shabab had recently blown up a KDF transport vehicle with an improvised explosive device, killing eight soldiers.

About a week later, a crowd of onlookers watched as a military vehicle arrived at the Islamic school where Elmi was a teacher. Relatives ran to her home soon after.

“My son had never left this cluster of villages. He was a sober and polite person who lived for his family,” she said on a recent day, gathered with her son’s three widows and their children. “To this day I can’t explain why they took him. No one has ever told me what he was accused of.”