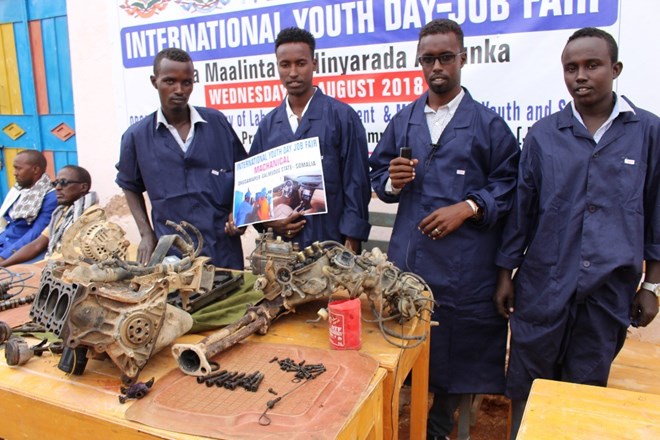 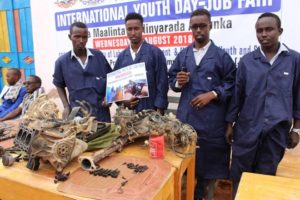 A group of young men showcase their trade and skills at a job fair, in Dhusamareeb, Galmadug, August 2018, as part of series of International Youth Day job fairs around country, run by Federal Member State Ministries in collaboration with the Federal Government and the United Nations (UN).

Hundreds of young people have taken part in first of a kind job fairs in Somalia as part of a week of International Youth Day celebrations in the country. The fairs were held in Galmadug, Hirshabelle, South West State, Jubaland and Puntland from 12th to the 16th August, and gave young people the opportunity to showcase their trades and products, with businesses and government officials providing information on internships, job placement, and career guidance in some states.

Telecommunication companies, printing companies, construction companies, and small businesses attended the fairs to meet the young people. Before each job fair Government officials in each state met with young people to discuss the outcomes they would like to see from the events.

International Youth Day is commemorated every year on the 12th August to draw attention to youth issues worldwide. In Somalia, lack of concrete employment opportunities for youth and lack of social safety nets has meant that young people become involved militant groups and in piracy. 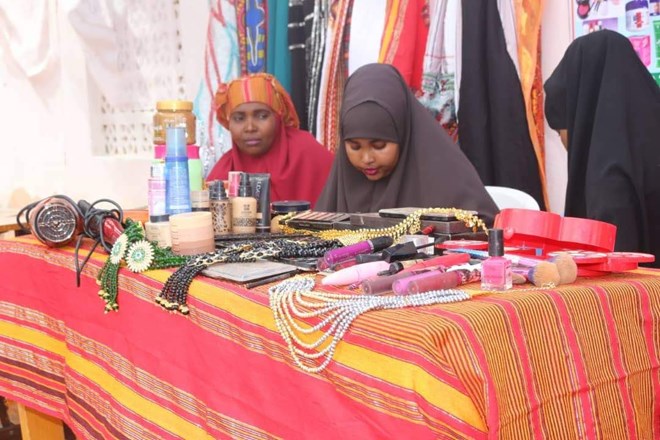 Young women show their products to participants at a job fair, in Dhusamareeb, Galmadug, August 2018. The fair is one of many being run around the country by Federal Member State Ministries in collaboration with the Federal Government and the United Nations (UN) support, as part of a week of International Youth Day events. 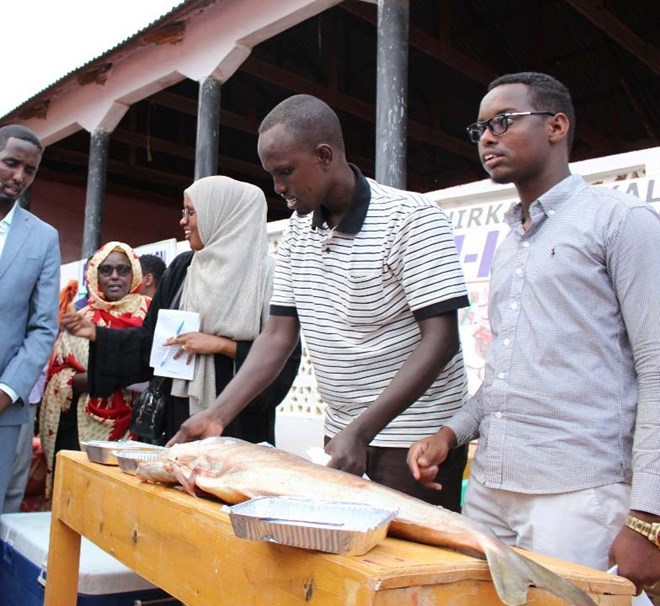 Young men and women speak about their fishing trade, during an International Youth Day job fair, in Dhusamareeb, Galmadug, August 2018, as part of a series of job fairs held around the country by Federal Member States in collaboration with the Federal Government and the UN.

To address this, the Government of Somalia has committed to create employment and opportunities for young people in its 2017-2019 National Development Plan. The Youth Employment Somalia Programme supports this work by creating sustainable and short-term job opportunities for young people through demand-driven vocational skills training, enterprise development and labour-intensive infrastructure development in key sectors such as fisheries, solar energy and construction. Over 1200 young men and women have received vocational and life skill training under the YES Programme in 2018, and the job fairs are considered a critical component in connecting and helping young people learn more about commercial trades, entrepreneurship and livelihoods skills.

The Youth Employment Somalia Programme is implemented by five UN agencies working as one in partnership with the Government, private sector and civil society, led by the Federal Ministry of Labour and Social Affairs. The UN agencies are:  the Food and Agriculture Organisation of the UN (FAO), the International Labour Organisation (ILO), UN-Habitat, the United Nations Industrial Development Organization (UNIDO), and the United Nations Development Programme (UNDP). The programme is funded by Denmark, Italy, Sweden, and Switzerland as well as the UN Peace Building Fund (PBF).