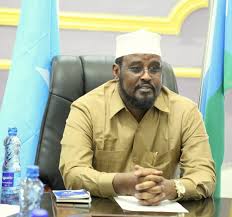 Somalia’s Federal government has recognized Jubaland leader Ahmed Mohamed Islam as the interim leader of the state. The government rejected the outcome of the disputed process in August last year in which Ahmed Madobe was re-elected.

A letter from the office of the president, Villa Somalia has said the regional leader will lead the administration for two years in an interim basis starting from the previous end of his term. Villa Somalia urged president Ahmed Madobe to start reconciliation process to bring together all warring sides in the state and resolve the difference resulted from the political tension.

Mogadishu also called upon the neighboring Kenya to desist from meddling its domestic affairs through its Kismayo based Jubaland state.

Ahmed Madobe is expected to arrive in Mogadishu as part of state leaders following the invitation for national security convention.

The Federal Govt termed his re-election as illegitimate. The statement is the first from the Federal gov’t in Mogadishu since he was controversially re-elected as the president of Jubaland state of Somalia last year.

After being elected against the wishes of president Farmajo and Ethiopia last year, Jubaland president Ahmed Islam and its residents faced travel restrictions after Mogadishu imposed ban on direct air flights to Kismayo and from the region.

The sanction hit business as air flights were only guaranteed of safe movement in the southern regions as the area between Kismayo and Mogadishu is fully controlled by al Shabab militants.