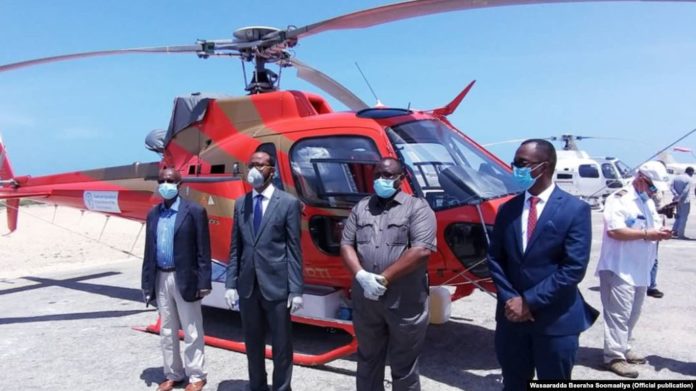 Food & Agriculture Organization (FAO), handed over today the first two helicopters to the officials of the ministry of agriculture of Somalia. The helicopter sprayers acquired by Somalia will support the fight against locust spread in southern Somalia. It will be the first aerial spray operation conducted by Somalia for thirty years. On the occasion, the minister of agriculture, Saed Hussein Ali, said that the locust became problematic to the farming community in southern Somalia. He added that the helicopters are equipped with organic bio-pesticides which do not have any problem with the environment including the people and the livestock. The minister has reiterated that the mission is to bring the locust infestation problem to an end once and for all. Somalia’s minister of transport and civil aviation, Mohamed Abdulahi Salad Omar, told that he is ready to be part of the effort that the ministry of agriculture is combating the locust plague which have impacted of the lives of farming community in Somalia. He congratulated on the work that the ministry is overseeing but reiterated that he is committed to cooperate with the ministry over the use of the airspace in a bid to eliminate the threat posed by the locust in Somalia. The locust had damaged crops and many plantations in southern Somalia which left the farming community in a state of despair over the lack of capacity to fight the desert locust.