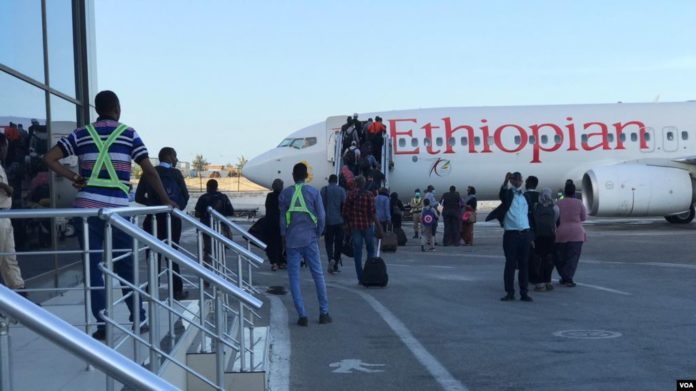 160 passengers holding dual nationalities and were stranded in locked-down in Mogadishu have boarded evacuation flight today. Since the outbreak of the novel coronavirus was reported in Somalia, the government took strict measures including imposing ban on international flights to and from Somalia in a bid to contain the spread of the pandemic. The passengers were originally from Somalia but hold foreign passports mainly from USA, Britain and Canada and were stranded in Mogadishu, the capital of Somalia for the past weeks due to the lock-down. The US embassy in Somalia has arranged the flight for its citizens for evacuation but Canada and the UK have joined so that their citizens will be repatriated from Somalia. They have boarded the Ethiopian airline flight from Mogadishu and destined for Addis Ababa. The passengers will make short stopover at Addis Ababa airport before boarding flights heading to Washington DC, London and Toronto. The US embassy has organized the flight, but passengers were notified to pay ticket fares. Some of the passengers have expressed concerns over hiked ticket fares by Ethiopian airlines by exploiting them during the lock-down.