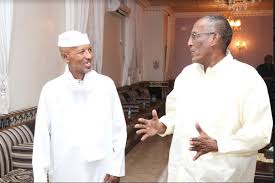 The above title is the essence contained in the following open letter congratulations to the President of  Somaliland H.E. Musa Bihi Abdi by former Vice-President Hassan Isse Jama, who is the top-most notable in SNM hierarchy.

Dated 17th June 2020, the article is based on last week’s resuscitation of Somaliland-Somalia Talks which saw the country pragmatically re-state hence re-affirm its conviction of continuing the way the President presented both his oral arguments and print testament.

In my personal capacity as Hassan Isse Jama, I congratulate the President of the Republic of Somaliland H.E. Musa Bihi Abdi for the triumphant victory he achieved at the Somaliland-Somalia talks convened by US, Ethiopia and Djibouti (as intermediaries) hence hosted in Djibouti which had African Union in attendance as observers.

I underscore the following points as the main basis of my congratulations to the Head of State for the bravery he depicted in putting forth the emotive aspirations of his people and that of his country asfar as not only sovereignty but full international recognition is concerned.

International community to both countries should not be politicized and that the Talks should prioritize the plight of its subjects (people).

The subsequent administrations later on shelved that policy hence when I later floated back the idea in the local media, the administration of Ahmed Silanyo initiated the process and President Musa is today underscoring it; this is because the interests of Somaliland can be realized in this manner.

Somaliland will at most (in this manner) achieve international recognition or, to a lesser extent, properly acclaim international acknowledgement.

When you are righteous you put forth your case. This is because the international community protocol demands one (entity) to put forth (plainly) one’s case hence as expected ought to argue out the facts.

It is just as the opposition parties have the right to put an administration in check and advices it (where and when necessary) against any negative aspects thereof.

H.E. Hassan Isse Jama signed the article in his capacity as a veteran SNM, hence noted that he was writing while in sojourne in the Turkish country.