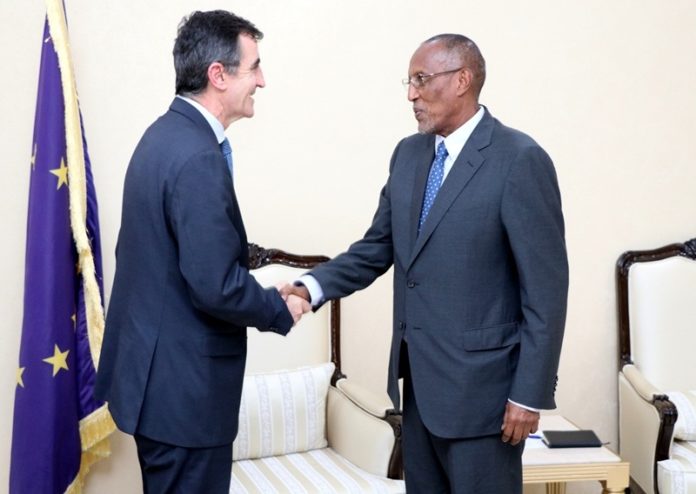 The European Union is pushing for the resumption of talks between Somalia and Somaliland.

EU ambassador to Somalia Nicolas Berlanga held talks via video conference with Somaliland President Muse Bihi where he expressed the EU’s unwavering commitment to assisting in that process.

Berlanga alluded to the talks between Somaliland and Somalia, drawing parallels with European Union experience.

Ambassador Berlanga urged Somaliland to work on reaching agreements to settle the problem of its citizens and to fulfil their aspirations.

The envoy to Somalia emphasized the strong ties between the parties and his commitment to further relations with Somaliland.

Somaliland’s minister of planning was part of the video conference on the marking of Europe Day 2020.

The ambassador’s remarks join the chorus of the international community voices that are pushing for talks between Somaliland and Somalia.

Last July, Somaliland withdrew from talks with Somalia in protest against the new commission appointed by President Mohamed Abdullahi Farmaajo that included the son-in-law of the former president, Siad Barre.

Somaliland is objecting to the appointment of General Abdirahman Hussein Guulwade, which reminds of the massacre of the members of the Isaaq Clan in the 1980s during Barre’s reign.

Gen Guulwade, former commissioner of police—who fled with Barre during the popular uprising in Mogadishu in January 1991—was deputy head of the six-member national commission for reconciliation dialogue with Somaliland.

Somaliland cancelled its participation similar talks in March this year following a fall out with the Federal Government over the Berbera port.

Somaliland, which declared unilateral independence from the rest of Somalia in 1991, has been seeking international recognition.

According to a report by the International Crisis Group last year tensions between Somalia and Somaliland remain high.

The core bone of contention is still Somaliland’s political status in light of its 1991 declaration of independence, which Somalia rejects.

“Somaliland’s deal with an Emirati conglomerate and Ethiopia to manage the port of Berbera – which Mogadishu saw as challenging its claim to sovereignty there – deepened antagonism,” states the report.

The report, however, says the frictions eased in 2019, and outside pressure has created some momentum toward renewed negotiations between the two sides, which last gathered to talk in 2015.

“Given high levels of suspicion between Somalia and Somaliland, international mediation will be crucial to achieving progress, but roles need to be assigned carefully.

“While Turkey and Ethiopia have been diplomatically very active in both Mogadishu and Hargeisa, neither is ideally positioned to play the lead role.

“Turkey’s relationship with Saudi Arabia, which also has deep interests in both Somalia and Somaliland, is too fraught.

“And despite Ethiopia’s recent improvement of ties with the Farmajo administration, it has historically enjoyed too close a relationship with Somaliland for Mogadishu to trust it fully,” the report by the International Crisis Group added.

The report says the most promising approach might be for the African Union to convene the talks, ask an eminent statesperson to lead them and solicit technical assistance from a “group of friends” that might include countries like Turkey, Ethiopia, Sweden and Switzerland – which have been at the forefront of efforts to encourage talks – as well as the European Union.