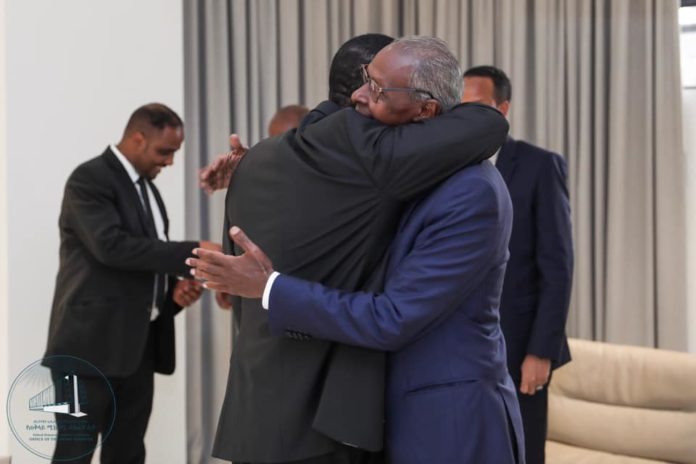 The Eritrean Government officials came to deliver a message of condolence from President Isaias Afwerki and to deliberate upon the one-year peace journey taken between the two countries.

Both parties reflected on the milestones achieved over the past year in ceasing of hostilities and discussed upon the next steps to be taken in further strengthening the relationship, according to the office of the Prime Minister.

Almost a year ago to this day, both Osman Saleh and Yemane Gebreab came to Ethiopia for the landmark peace talks marking the first time in twenty years a high-level delegation visited from Asmara.

To celebrate the strengthening relationship between Eritrea and Ethiopia, Prime Minister Abiy joined by the two officials, planted seedlings within the compound of the Prime Minister’s office.

Following its defeat of Ethiopian government forces (Derg) in 1991 to establish national independence, Eritrea instituted an official holiday to pay tribute to those who died for the country’s liberation.

The struggle, which lasted from 1961 to 1991, claimed the lives of an estimated 65,000 freedom fighters and tens of thousands of civilians.

Many Eritreans observe Martyrs’ Day by filing into mass mourning processions that conclude at the “Martyrs’ Graveyards” located throughout the country.

On the eve of Martyrs’ Day in 1997, the government expanded the national tribute by opening the National Martyrs’ Park, situated in a forest and wildlife preserve outside the capital city, Asmara.

Individuals arrive to pay their respects to the dead by finding names engraved on the National Martyrs’ Monument (See EP’s Cover Photo) and walking through museums that depict the 30-year struggle for independence.