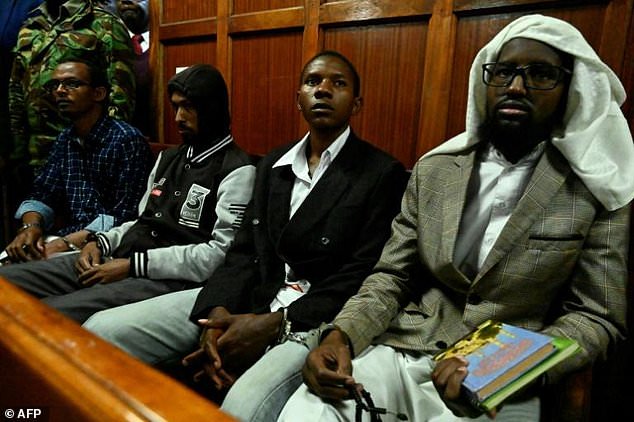 From the left, Hassan Aden Hassan, Mohamed Ali Abikar and Rashid Charles Mberesero were convicted of being accomplices in the 2015 massacre. Sahal Diriye Hussein, on the right, was acquitted

A Nairobi court on Wednesday found three men guilty of abetting Somali jihadists who carried out a 2015 attack on Garissa University in northeast Kenya in which 148 people were killed.

A fourth individual was acquitted, Judge Francis Andayi said, adding that sentencing will be handed down on July 3.

The April 2 2015 attack was carried out by four gunmen from Al-Shabaab, a Somali jihadist group linked to al-Qaeda.

Firing their weapons, they stormed the students’ hall of residence at dawn.

They first separated the victims according to their religion, letting Muslims go but keeping and then killing the others, most of whom were Christians.

It was the second-bloodiest terror attack in Kenya’s history, surpassed only by al-Qaeda’s bombing of the US embassy in Nairobi in 1998 that killed 213 people.

Andayi said the three — Kenyans Mohamed Ali Abikar, Hassan Aden Hassan and Rashid Charles Mberesero, a Tanzanian — “were members of the Al-Shabaab terrorist group whose members carried out the attack”.

Prosecutors had proven “beyond reasonable doubt” that they were involved in a conspiracy for “committing a terrorist act,” he said.

A fourth person, Sahal Diriye Hussein, was acquitted. In January, the court also acquitted a university guard who was accused of taking pictures during the assault — an allegation for which no evidence had been produced, the judge found.

During the trial, prosecutors placed 22 witnesses on the stand, most of them student survivors.

They also showed evidence that the three had been in contact with the gunmen, especially be telephone. 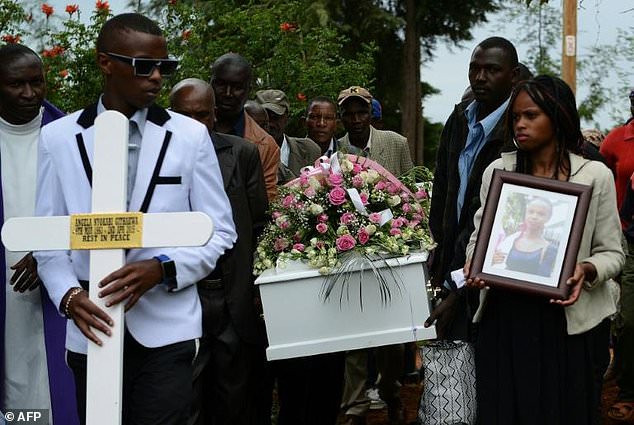 The jihadist gunmen separated students according to their religion, killing non-Muslims

Mberesero, the Tanzanian, had been also been seen on the university campus three days before the attack, and on the day of the attack itself had been found under a bed in the hall of residence and was unable to explain why he was there, prosecutors said.

The three convictions are the first to result from a long-running investigation and prosecution.

All four gunmen were killed by security forces. The operation’s suspected ringleader, Mohamed Mohamud, also named “Kuno,” a former professor at a Koranic school in Garissa, was killed in southwestern Somalia in 2016.

The Shabaab said he had been killed by “US crusaders”.

The Shabaab were chased out of Mogadishu in 2011 by the 22,000-strong African Union peace-enforcement mission, AMISOM.

They nevertheless control vast rural areas and remain the key threat to peace in Somalia.

The group is fighting to overthrow the internationally backed government in Mogadishu but also regularly carries out attacks in neighbouring Kenya, which has troops in Somalia as part of AMISOM.

In September 2013 the Shabaab claimed responsibility for a dramatic raid on the Westgate shopping mall in Nairobi that killed 67 people over a four-day siege. 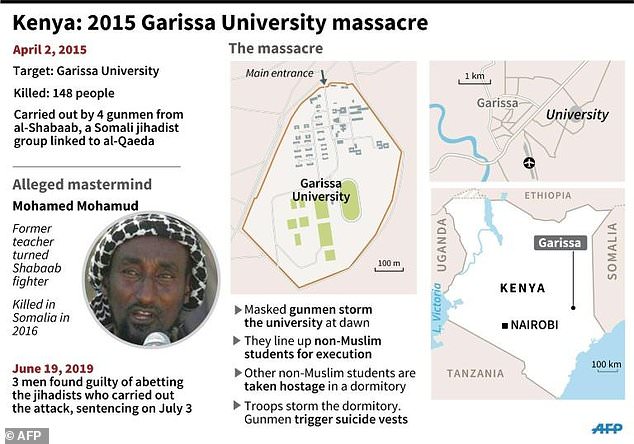 In June-July 2014 around 100 people were killed in raids in the coastal Lamu region in Kenya’s northeast, home of a once-popular tourist island.

In January 2016, the Shabaab overran a Kenyan army outpost at El-Adde in southern Somalia. Some estimates say that as many as 180 soldiers died.

And on January 15 this year, 21 people were killed and 28 injured when five Shabaab gunmen attacked the DusitD2 hotel and office complex in Nairobi.

The security response to Garissa was strongly criticised by many Kenyans.

It took 16 hours for a special anti-terror unit to bring the attack to an end, their deployment slowed by a senior police officer who had commandeered the force’s plane for a family excursion.