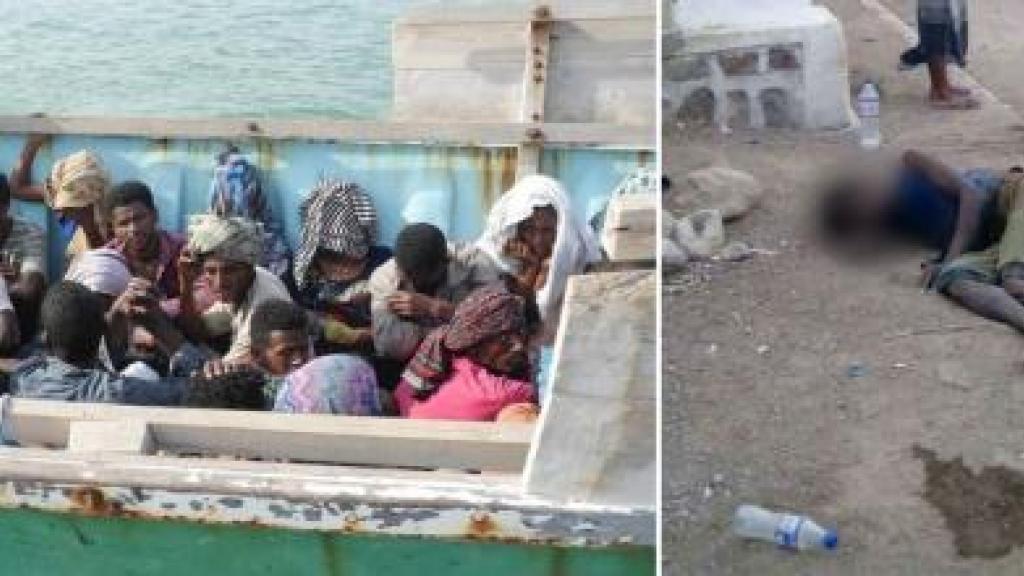 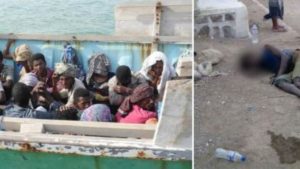 Dozens of Ethiopian migrants died of cholera in Djibouti in June 2018. Their migration route went through this tiny state on the Horn of Africa, from where they try to get to Yemen – a nation in the grip of a civil war – and Saudi Arabia. Those who don’t die of hunger and thirst on the perilous journey often stop in the Djiboutian town of Obock, where they can wait for a crossing over the Red Sea. But once they get to Yemen, the same horrors await them as in Libya: they are almost systematically kidnapped by traffickers who torture them and rape the women in order to demand ransoms from their families. Our Observers revealed to us this forgotten humanitarian catastrophe.

Over the last few weeks, Djiboutians have been alarmed by the rise of cholera and acute diarrhoea in the northern town of Obock, where hundreds of migrants arrive each week as a stopping point before trying to get to neighbouring Yemen.

Citizens of the town have published a number of photos and videos on social networks of the mounting crisis. The FRANCE 24 Observers team has blurred some of the images in respect of the privacy and dignity of the people in them.

Map of the route that Ethiopian migrants take to get to Yemen, crossing through Djibouti. Published in a report by the Institute for Security Studies.

A man is carried in an improvised stretcher in a street in Obock in June 2018.

I took this shocking video during Ramadan. The man was suffering severely from cholera. Our society was really shocked by this, because the illness is very contagious.

Cholera is an infectious disease that causes severe watery diarrhoea, leading to chronic dehydration and even death if left untreated. It is caused by oral contact with water contaminated with a certain type of bacteria.

These photos show people suffering from cholera, according to our Observers who took these photos.

In a statement published on June 21, the Djiboutian government said that it had counted numerous cases of “migrants suffering from acute diarrhoea” and regretted the “deaths of some migrants”. The government and the International Organization for Migration have identified the cases as “acute diarrhoea” rather than cholera. In 2017, cases of both acute diarrhoea and cholera were reported in Obock, according to Middle East Eye.Inhabitants of Obock told the FRANCE 24 Observers that between 30 and 50 migrants and at least three local inhabitants had died – according to them from cholera – during June. It proved impossible, however, to verify this information. Obock’s hospital refused to publish official figures for how many people had died.

“Migrants are dying of hunger and thirst”

Our Observer in Djibouti is a former people smuggler. Now, Ahmed Mohamed Kamil has turned his back on his old life, and works small jobs to try to raise money to put in place projects to help migrants. For him, the primary problem is the state and the way it has ‘abandoned migrants’.

The migrants who come from Ethiopia [about 80 percent of them] arrive in Obock after having spent days crossing a desert landscape where it is regularly more than 50 degrees Celsius. Around Lake Assal [a crater lake situated between the Ethiopian border and Obock], there are often corpses and human bones. They are the remains of migrants who died of hunger and thirst. There are dozens of them every year.

A small group of migrants receiving aid from an Obock-based charitable group, which distributes food and water to people in need along the migration route. Photos taken between Tadjourah and Obock by our Observer Omar Hassan Houmed on July 18, 2018.

The people who arrive at Obock wait in the neighbourhood of Fantaherou for their boat to Yemen. They sleep under trees or makeshift shelters. Lots of them have been conned by smugglers and have lost all of their money.

They depend on our generosity to survive. The state does nothing. Even if we’re poor too [one in five Djiboutians live under the poverty line], there are lots of us who share our food with the migrants.

There aren’t many NGOs in Djibouti to help these migrants. Action contre la Faim (Action Against Hunger) and Médecins Sans Frontières (Doctors Without Borders) left the country in May 2018 and 2012, respectively. The United Nations High Commissioner for Refugees (UNHCR) focuses primarily on refugees who have fled Yemen’s war and arrived in Djibouti, where they are housed in a shelter in Obock.The Djibouti Red Crescent, the National Office for Refugees and Disaster Stricken People (ONARS), and the International Office for Migration (IOM) deal with the voluntary repatriation of migrants back to their countries of origin and take responsibility for the corpses found by the side of the roads. The International Office for Migration has also set up psychological help for migrants who have come back from Yemen traumatised and also education sessions about the dangers of migration.
The corpses of people found on the migration route between Ethiopia and Yemen, taken at an unspecified date. Photo taken from a video produced by the Djibouti office of the International Office for Migration.
“Lots of people don’t even know that there is a war in Yemen”

Many children do attempt the crossing (11 percent), but the vast majority of them are adult men (70 percent). Our Observer says that there just isn’t enough money to feed, give water to and shelter all of these people.

The area around Obock, where migrants wait before being able to cross to Yemen. Photo taken by our Observer in June 2018.

These migrants, for the most part, are leaving Ethiopia in the search of a better life in Saudi Arabia. Many of them leave the country for political reasons – as is the case for the Oromos, an ethnic group that is marginalised and repressed by the government.

Most of them come from poor, rural areas. They did not get much of an education and lots of them don’t even know that there is a war going on in Yemen. People smugglers lie to them, telling them that everything is fine and the route is safe. Others may know that there is a war, but they’re desperate and put their destiny in God’s hands.

Some smugglers take advantage of their naivety, for example by taking them to Obock, telling them they’ve already arrived in Yemen, and taking all of their money. Because they don’t know that you have to cross a sea to get to Yemen, they’re easily conned like this.

Every month, the IOM identifies at least 10,000 migrants, most of them Ethiopian, in Djibouti. There are numerous shipwrecks and sinkings in the Red Sea and the Gulf of Aden, which separate Djibouti from Yemen. Over the last 10 years, almost 3,500 people have died trying to cross, according to the IOM. In May 2018, the IOM recorded more than 25,000 people passing through Djibouti. In 2016, the Danish Refugee Council in Yemen reported a record number of 117,107 illegal arrivals.

A boat full of people trying to get to Yemen, intercepted in the night of the May 14/15, 2018, by Djiboutian coastguards based in Khor Angar. Photos published on their Facebook page.

According to reports by NGOs like Human Rights Watch, the Institute for Security Studies, and the first-person accounts of migrants the France 24 Observers team spoke to, those migrants who do make it to Yemen are nearly always kidnapped. If they are not capable of paying a ransom, usually around €300, they are tortured and raped. The ordeal only stops if their family, who have been contacted by telephone so they can see or hear the torture, agrees to pay the ransom. Others are recruited by mercenaries or forced into slave labour.

It’s not a far cry from what migrants trying to get to Europe go through when passing through Libya.

If the ransom is paid, they then have to pay between €550 and €700 to get to Saudi Arabia. Very few of them manage to get there. The money made by migrant traffickers is increasing; according to cautious estimates by the Institute for Security Studies, it was up to €3.8 million in 2016.

How is the trafficking organised? FRANCE 24 spoke to a specialist in the subject who wanted to remain anonymous. They said that the migration route most commonly taken by Ethiopian migrants is a ‘regional network managed from Yemen’.

In Ethiopia there is a head smuggler who sends migrants to Djibouti. He hires people to “recruit migrants” in villages and markets. They tell them stories about fabulous successes in Saudi Arabia. Of course they never mention the war in Yemen.

Djibouti is a kind of transit zone for the migrants. The smugglers have less responsibility there and are less well-paid than the others. According to what I’ve found, the head of the whole smuggling network is based in Yemen, and the money is redistributed form Yemen to different smuggling chiefs in Ethiopia and Djibouti.

As a reformed people smuggler, our Observer Ahmed Mohamed Kamil saw this system from the inside. He confirmed that there was a sole network spread out across the three countries.

The smugglers in Obock are mostly young people without work, usually in their twenties. They got into trafficking – a very lucrative activity – as an alternative to unemployment. When I was doing it, I was earning 1.5 million Djibouti francs per month [around €7,200 euros – in stark contrast to the average salary in Djibouti, which is around €90 a month]. I stopped when the war in Yemen started.

Nowadays I would say that there are around 20 or 25 people smugglers left in Obock. There are others in Tadjourah [a neighbouring town around 60 kilometres away from Obock], but I don’t know how many.

Migrant trafficking continues in Djibouti, despite the fact that the country is one of the few stable and peaceful nations in the region. The specialist that we spoke to said that this is down to the “government’s willingness to buy social peace”.

The north of Djibouti [where Obock and Tadjourah are located] is a disadvantaged area, where the Afars [an ethnic group that makes up 35 percent of the population] feel discriminated against. This feeling of injustice provoked a civil war in the 1990s. The trafficking helps to feed a lot of people: smugglers distribute their earnings to the community during weddings, funerals and religious festivals. Putting a stop to it could cause tension to rise up again.

However, the state has recently taken several measures. In 2016, after two soldiers were killed by smugglers, a law was voted that would punish migrant trafficking with two to five years in prison. Authorities have also set up roadblocks, and coastguards patrol more regularly in order to intercept boats that are heading to Yemen.

But the migrants, in particular Oromos, continue to make the attempt. In July, 150 people crammed themselves onto small wooden boats, risking their lives to get to war-torn Yemen.

This article was originally written in French by Liselotte Mas.