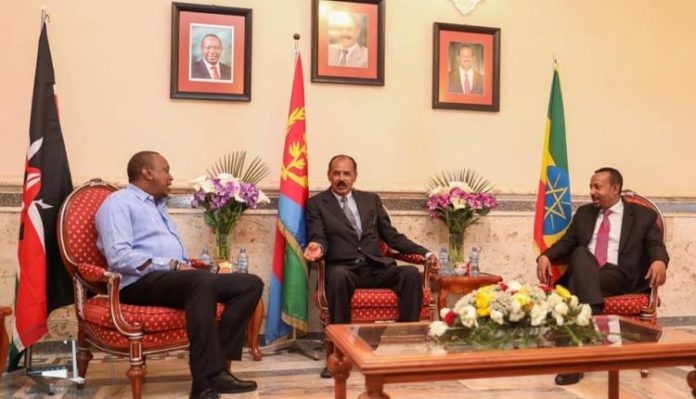 The three leaders will discuss timely regional issues in a Tripartite Summit today while bilateral matters will also feature in separate meetings, according to Yemane Gebremeskel, Eritrea’s Minister of Information.

The peace pact signed between Ethiopia and Eritrea in July, ending two decades of animosity following a dispute over their border, is having positive effect throughout the horn of Africa.

Over the last few months, the horn of Africa has seen negotiations and reconciliation and the start of processes of normalization between Eritrea and Djibouti as well as Eritrea and Somalia.

The restoration of peace between and among the members of the region is already providing for the possibility of extended economic integration and a wider political response.

The two countries have been conducting extensive discussions on ways to institutionalize the national and border trade, port usage, custom, immigration and transport linkages, and the comprehensive agreement would be tabled for the respective leaders for approval, he said.

After Ethiopia and Eritrea endorsed the agreements by their legislative organs, they would establish a joint commission that supervise the execution of accords in such a way ensuring the mutual benefit of people of the two countries and putting the rapprochement in solid base, he stated.

He further said discussions and negotiations are underway to expand the partnership in health and education sectors and reach a final deal in the trade law.