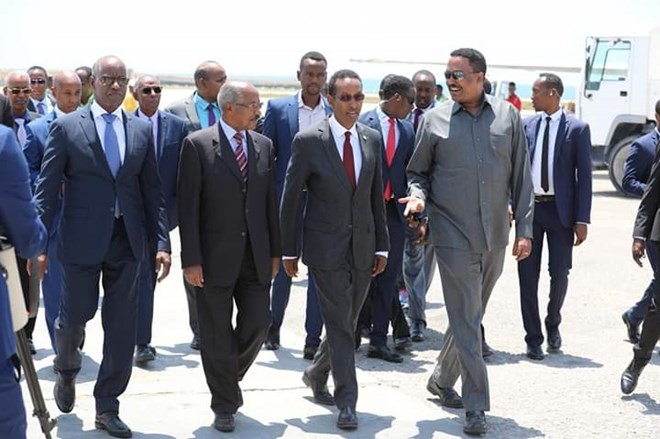 MOGADISHU–The Foreign Ministers of Ethiopia and his Eritrean counterpart arrive in Mogadishu today on unannounced officials visit to Somalia. The Ethiopian FM, Dr. Workneh Gebeyehu and his accompanied Eritrean FM, Hon. Osman Salah was greeted at the Aden Adde airport in Mogadishu by Somalia’s foreign affairs minister, Hon. Ahmed Isse Awad, ministers and government officials. Security is heightened in Mogadishu as major city roads are blocked as security forces are on high alert patrolling them. The High Level Ethiopian and Eritrean delegation is expected to hold talks with Somalia’s government officials during their stay in Mogadishu.

The discussions will be focused on boosting the bilateral ties between Somalia, Ethiopia and Eritrea. Ethiopia reconciled with Eritrea after its reformist leader, the Ethiopian PM, Dr. Abiy Ahmed made peace with its biggest foe, Eritrea and ended the longest raging war in the Horn of Africa. The rapprochement between Ethiopia and Eritrea paved the way that Somalia ended its thaw with Eritrea whereby Djibouti which engaged war with Eritrea over border dispute also ended the hostilities after the leaders of the two nations met in Riyadh thanks to the shrewd leadership of Saudi king Salman.