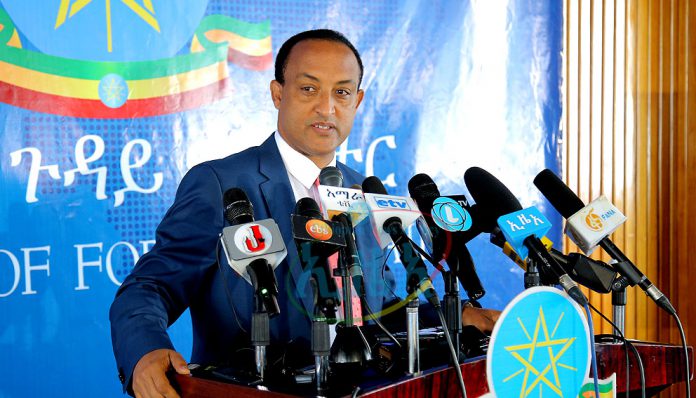 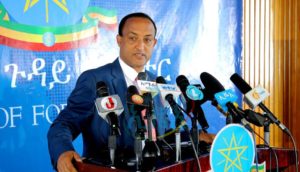 Addis Ababa August 03/2018 Ethiopia is willing to help negotiate the border dispute between Eritrea and Djibouti, according to Ministry of Foreign Affairs.

Ministry Spokesperson Meles Alem said today that Ethiopia is ready to bring Eritrea and Djibouti to the round-table and promote the sustainability of peace and security in the region.

“Ethiopia wants to contribute its share to bring harmony between the two states. We want to see good relationship between Djibouti and Eritrea. So, we will work responsibly to settle their differences and restore peace and stability in the region,” Meles added.

In addition, the Spokesperson told journalists that the visit of Prime Minister Abiy Ahmed to the US has helped break the wall of hatred and suspicion that prevailed among the Ethiopian Diaspora during the past 40 years.

According to Meles, the call of the PM for harmony and unity was warmly received and helped mobilize Ethiopians abroad to participate in economic, social and political affairs of the country.

“Over 40 discussion forums were organized in Washington DC, Los Angeles and Minnesota. In those forums, over 70 opposition political parties and hundreds of thousands of Ethiopian Diaspora have participated. More than 26 opposition parties are expected to come to Ethiopia to peacefully struggle in the country,” he elaborated.

The ministry will open consular office at Minnesota where more than 60,000 Ethiopians live, it was learned.

The Premier’s visit in USA also helped to promote bilateral relations with US, IMF and World Bank. They have expressed their support to the reform, according to Meles.

Oromiya Regional State President, Lema Megersa, Foreign Minister Workineh Gebeyeh and other higher officials accompanied the prime minister on his visit to the US.