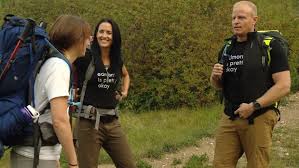 Four friends in Edmonton are preparing for a grueling 65-kilometre hike through southern Ethiopia to help raise money for water filtration systems in that country.

The team will head to the East African country in January and walk from Arba Minch to Tsayte – most of it uphill.

The four have partnered with HOPE International Development Agency, a non-profit, and want to raise $1 million to help bring clean water to Chano Dorga, an Ethiopian village with 4,000 people. According to the group’s fundraising page, villagers travel two kilometres to gather drinking water from a contaminated river where people also bathe, wash vehicles and clean clothing.

“Going there and raising money and seeing the projects being executed in these villages is a really important part of my life,” Jeffrey Hansen-Carlson, who has travelled to the country twice before, told CTV Edmonton.

This time, he will have company.

“When he asked me to do it, I just closed my eyes and said, ‘yes,’ even though it was a huge undertaking and I was scared and I didn’t know if I could do it,” Kaylee Hanes, one of the team members, told CTV Edmonton.

“I’m terrified,” she said. “This is totally beyond anything I would normally do. I’m not what most people would say (is) ‘athletic.’”

She and the rest of the team hope Edmontonians will contribute to their fundraising efforts or start their own for causes they care about.

“I think you can take that passion for your own community and transplant it in far off remote villages that maybe just need a hand,” Hansen-Carlson said. “They’re not mutually exclusive.”