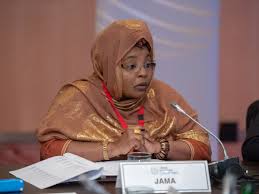 MOGADISHU—Bilateral trade volume reached quarter and eighty five million US dollars in 2017 with a year on a near growth of 20 %.

The trade volume between China and Somalia has grown people to people exchange has also intensified.
The businessmen are exploiting investment opportunities in Mogadishu which is recovering from decades of civil war.
Somalia’s minister of ports and marine transport, Ms. Mairiam Aweys Jama held a meeting with the investors and said that Somalia expect more Chinese investment and hopes to sell more Somali food and other agricultural food products to China.
The businessmen have been encouraged to invest Somalia waters which indicate that there extensive fish stocks in Somalia’s coast.
This coast in fact deemed to be one of the richest waters in the region.
Somalia granted operational licenses up to thirty one investors from China to exploit tuna and other species of its coast to tap the sector for economic growth.
The visits are related to China oversea fishing association a distant water trawling group created in 2012 trade between Somalia and the East Asian giants.
Chinese ships have been allowed to operate for a period of one year in Somalia’s coast with agreement specifying there will be an automatic renewal for additional year.
The Chinese gov’t has in the past built over 80 infrastructure projects like hospitals, stadium and roads in Somalia.