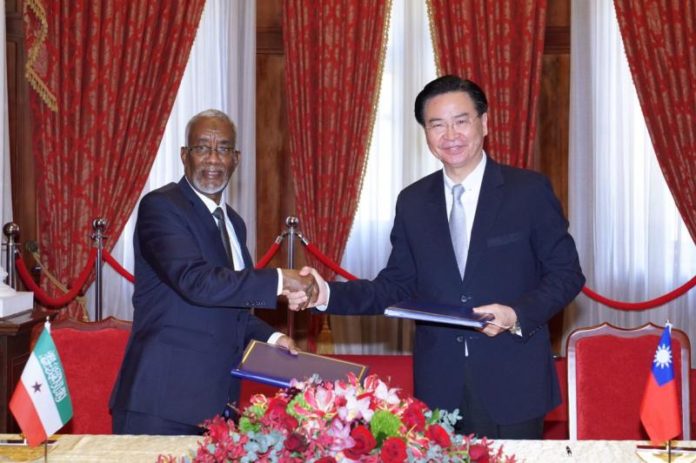 Somaliland & Taiwan reached a bilateral accord on Wednesday. Taiwan Ministry of Foreign Affairs confirmed to open representative offices in Taipei and Hargeisa.

Chinese embassy in Somalia said that it will defend the unity of one China at all costs.

“We will never allow anyone, any organization or any political party to separate any peice of territory from China at any time or in any form. Taiwan is an inalienable party of China.” Chinese embassy in Somalia tweets.

Tawian and Somaliland, an unrecognized state that broke away from Somalia in 1991, would set up representative offices in their respective countries. The two countries did not announce the establishment of formal diplomatic ties. They are strengthening existing relations with the new offices in the hopes that relationship flourishes. If they do eventually announce formal relations, then Taiwan would become the first country to diplomatically recognize Somaliland, which is considered an autonomous region of Somalia.

Taiwan’s Foreign Minister Joseph Wu said at a press conference, “Our two governments have agreed to swap official representative offices under the titles of Taiwan representative office and Somaliland representative office based on our friendship and shared belief.” He also noted that because formal diplomatic ties have not been established, the office in Somaliland will be called the “Taiwan Representative Office,” with no mention of Taiwan’s official name, Republic of China. And Somaliland’s Ministry of Foreign Affairs tweeted, “The Government of Somaliland identified issues of mutual concern, including building-bridges of diplomacy; opening missions to boost political and socioeconomic links between the Republic of Somaliland and the Republic of China (Taiwan).” The two sides have signed agreements in February 2020, but only just made the details public. The new burgeoning relationship will focus on “agriculture, education, energy, fisheries, health, information and communications, and mining.”

The two have a unique relationship with a larger, internationally recognized country. For Taiwan, that is China; and for Somaliland, that is Somalia. China lays claim to Taiwan despite the fact that the People’s Republic has never established military or diplomatic control over Taiwan’s territory. No peace treaty was ever signed between the Kuomintang and Chinese Communist Party after the former’s retreat to Taiwan in 1949. China uses its status to pressure other countries into isolating Taiwan, and as a result, Taiwan only has 15 diplomatic allies, all of which are primarily small states in the Pacific and Latin America, and one in Africa (Eswatini). Observers always question if and when China will attempt to take Taiwan by force. In Somaliland’s case, it declared its independence from Somalia after a civil war in 1991, but the international community has not recognized its independence from Somalia. Somaliland has faced the challenge of Somalia’s failed state status for a number of years, which has slowly improved recently. Instability within a neighbor that you have declared independence from poses a different set of challenges than the ones that Taiwan faces vis-à-vis China.