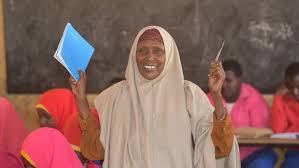 At 52 years, Khadija Hassan commonly known as ‘Mama Khadija’ fights for the education of young girls and boys in Dadaab refugee camps. As soon as she completed high school, war broke out in her country and she fled to Kenya.

Khadija arrived in Dadaab in April 1992 and soon after,  got an opportunity to study English for two and a half years.

“I was then hired by CARE International, as a social service worker. My work was to identify social issues affecting the refugee community and advocating for interventions and helped me learn the diverse challenges faced by refugees made me realize my passion of assisting people,” says Khadija.

“Being a hard worker, my employer transferred me to one of the schools as a Somali teacher in 1997. At the time, I remember seeing only one or two girls in upper classes,” she adds.

Khadija recalls how in 1997, the only library in the school she was teaching in was set on fire by the community due to a misunderstanding on the purpose of a verification exercise scheduled to take place at the facility and organised by UN Refugee Agency, UNHCR.

In the same year, Khadija started working with learners with special needs at Midnimo Primary school where she worked for seven years before being promoted to the position of Head teacher of Friends Primary School in 2004, in Ifo refugee camp where she still lives.

“Being a woman, I used to get despised and even threatened by men. However, they now see how important my role in the community is. This is evident by the number of girls who are in school today, performing better than the boys,” Khadija proudly points out. Children make up 57% of the Dadaab refugee population which currently stands at 210,019. It is estimated that only about 2 % get scholarships for higher education.

“My lowest moments are when young bright girls are married off against their will because of ‘cultural expectations’ or young boys abuse drugs and drop out of school. However, my hope is restored by the big number of girls and boys who are still in school. If we support them to get education, then we have succeeded,” observes Khadija